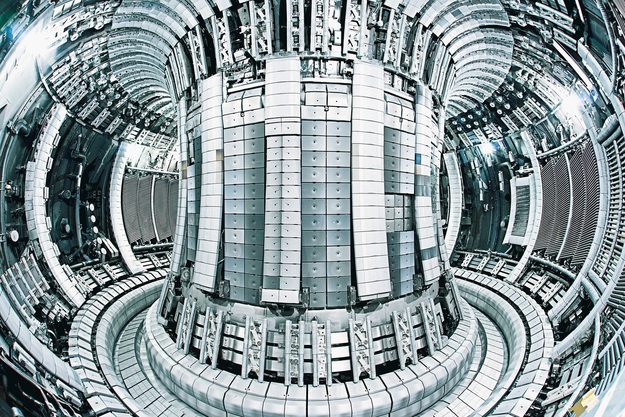 Nuclear Fusion; The Energy of the Sun

The massive billion dollar stellerator at Germany’s Max Planck Institute for Plasma Physics has just successfully shown that the long-sought concept of nuclear fusion may just be possible.

When they turned it on early this year (2016) the machine heated blobs of hydrogen gas up to 80 million degrees, creating helium plasma. The effect only lasted for a quarter of a second, but it proved to the research team that the concept will work.

The team at Max Planck Institute is not alone in this costly quest. Researchers at Lockheed Martin’s legendary “Skunk Works” also are claiming they believe they have achieved a breakthrough in building a nuclear fusion reactor. Like the German team, the Lockheed people are hoping to actually produce power from nuclear fusion within the next few years.

But going for a burn that lasts a fraction of a second to a full-time burning furnace that generates all the power the world might need is not something that will be easy to do. That’s because they are talking about creating a miniature replica of our sun and keeping it bottled up in a facility constructed here on Earth.

Why is this research important?

It is part of a world-wide search for new and non-polluting methods of creating the kinds of energy the world needs now and will want to have in the future. As our world gets hotter and hotter from accumulating carbon and methane gases in our atmosphere, the writing is on the wall. Either we find alternative green ways of producing the heat, electric power and fuel for our vehicle, and get this globe cooled back down, or we face extinction.

After the disasters at Fukushima and Chernobyl, reports of developing problems with aging nuclear power plants all over the world, and the effects of accumulating radiation from all of this nuclear activity, world leaders are scrambling for new sources of energy. They want something more reliable than sunlight, wind and ocean tides that will compare with the kind of energy the nuke plants produce.

So what is the difference between nuclear fusion and nuclear fission? Why isn’t creating a miniature sun even more dangerous than the energy from splitting some atoms?

Nuclear fission, which was first applied to construct the atomic bomb, involves splitting the nucleus of an atom. When used with heavy metal like uranium it produces a highly efficient form of energy but it produces extremely dangerous radioactive waste.

Nuclear fusion, however, involves fusing atoms together at extremely high temperatures. This is found to produce high amounts of energy and produces no radioactive waste. In fact there is no other byproduct except the heat.

Scientists explain that nuclear fusion has been keeping our Sun burning for billions of years. They believe that if we can ever harness this kind of energy, it will supply our energy needs for as long as humans remain in existence. Helium, which fuels the sun, exists in great quantity all around us. There is enough to fuel such a burner almost forever.
​
This all sounds wonderful, except for the big elephant in the room. Once they create it, where are they going to locate, contain and utilize a 180 million degree ball of plasma gas? How can anyone even get close to such heat? And how can it even exist on our planet without destroying everything around it?