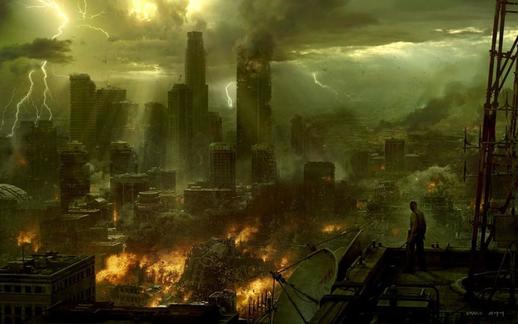 By James Donahue
We Believe Recorded in 2012

It should not be surprising to anyone with an eye on the damaged ecological system, our failure to be good stewards of our planet, that the Abba Father forecasts a bleak future for the human race.

In our sessions with the Abba Father on July 6, 7, 10 and 11 we were issued a “stern warning to all mankind to love unconditionally, no matter what the issue. Dealing with the Earth’s deteriorating (ecology) is too important to waste energy and words on worthless non-truths.”

The Abba Father said: “Roaring heat will come soon and this is to get minds focused on the real concerns. Heat will cover the earth soon, making it uninhabitable to mankind.”

We were told that two thirds of the human race will perish in the events that loom. “Money cannot help. Man will quickly learn his folly in not listening to the light ones who are here now, fighting for mankind,” the Abba Father said.
The disastrous events ahead appear to involve an alteration of the very dynamics of our planet. One message said: “Unexpected temperatures stored inside the earth will flow of heat. Untold heat in existence on earth. No one will expect this change. This will cause all mankind to prepare quickly. Events will cause real damage. Older earth in disrepair. Total damage is not manageable. All humans are at risk. Look toward the north. Eventual event there comes quickly. Also towards the eastern and midsection of the United States.”

An earlier message warned that “problems will come fast now, so focus on love for others. Prepare for diseases to come. Food and water will be short. It is very important to prepare.”

We contacted the Abba Father again on July 11 and asked for a clarification. We were told the earth “turns upside down.” This supported an earlier message that warned of a shifting of the poles that will happen so fast that “all (people) on earth will fall down and some cannot survive.”

We were told this wild movement of the planet will cause “volcanoes to erupt. Fear everywhere. Oceans are dry. Under earth is coming up. Mountains collapse. All mankind in peril. Will turn upward to sky. Will all fall down. Resonance will become dead. Light will go off.”

So what is happening to our planet? The Abba Father explained that “a decision was made to live in another system of change involving dimensions. The configuration on earth then will change all life forms. Dimensions will change. (The) world will not be same earth but a new one. One not remembered. No one is excluded here but must not destroy what is left (of the earth as we know it now).

The good news is that there appears to be a way of surviving this looming natural disaster.

We asked if we are about to go extinct and were told no. The Abba Father says one third of the human race will survive because these people will be protected by a resonance. “All their systems (are) configured differently to cope with this coming earth change. Quickly the ones turned on a different light source, one to do with calling forth their light source.”

As the Abba Father explained it: “A strong (Archangel) Gabriel will be there for instruction to help all to open their minds to ascend to the light. Mankind can only hold on to a light source so long and it cannot free everyone, so your human condition needs help.”

When we asked for a better understanding of what was going to happen we received this: “A triangle of light comes and puts a light source inside which cannot be removed. Then you are placed back on earth.”

He said: “the wayward ones who open up too late will not be going but your human love can urge them to see. Try not to give up on anyone. Freedom is there for all. The light is for all. Justice is there also, but it is not what you think. All justice is fake, not real. Kindness rules. No one can escape love but they still want to.”

We were told that “darkness remains here. It changes in a way you cannot comprehend now. But (you will) understand it soon.”