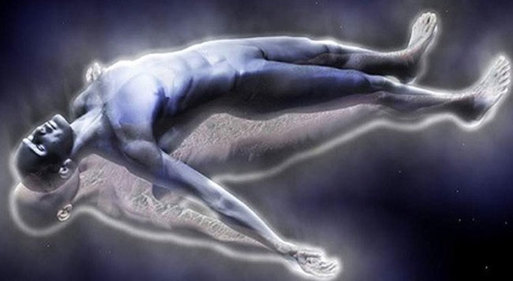 While there are scoffers, people who accidentally enter the astral for brief periods, usually while near death in a hospital emergency room, swear they are really out of their bodies. They find themselves hovering by a ceiling light fixture, watching the doctors and medical staffers working to bring their bodies back to life.

My wife's late brother, Wayne, was one of those who went down the black tunnel and into the light when, as a young man, he drowned. He said he emerged in a beautiful garden. The place was so pleasant he was disappointed when his brother pulled him out of the water and revived him. The experience was so vivid Wayne lived the rest of his life without fear of dying. He repeated the story to us many times. When his heart finally failed him and he died unexpectedly one afternoon in his Michigan home, there was a lot of comfort for those of us who knew his story. We perceived him back in that garden. It was a place he secretly yearned to return to all of his life.

We have called these events near-death experiences. A more correct description would be out-of-body experiences. Our son Aaron and the Monroe tapes taught us that with the proper training, we all can leave the body at will. Now that I can do it, I believe many of us have been doing it for years without knowing it. We do it unconsciously during a “daydream” and while we are asleep and dreaming.

A few years ago I was having vivid dreams of being another person in another place. They were strange dreams because each night while I was dreaming, events picked up where I left off the night before. It was as if I was living a double life in two separate worlds. The odd thing about my other self was that he was a smoker, trying desperately to quit his habit. In this life I don’t smoke. In yet another vivid dream I was flying an antique double-winged single-seat aircraft. I landed it on a grassy field. I have never flown an aircraft in my life yet in the dream I seemed to know exactly what I was doing and was comfortable flying and landing the aircraft.

I became interested in leaving my body at about the time of our awakening, after finding a book on the subject in an Ann Arbor book store. The author gave a variety of complex methods of tricking yourself into "dropping the body" and flying off into the void. I tried each method but none of them worked. I just couldn’t escape the body while I was awake. I think it was because I was trying too hard.

While living in Springerville, I started going through a series of recordings issued by The Monroe Institute that, among other things, were supposed to help people discover how to leave the body. I utilized the quiet afternoons, while Doris was away at work and I was alone in the apartment, to carefully go through the entire program. After completing the tapes I still was not successful. Then I got my hands on another Monroe tape that I was assured would help me get out of my body. In this tape, Robert Monroe's soothing voice is not present to instruct you on what to do. You simply hear Earth sounds; birds, waves against the shore, and then strange tinkling musical tones.

Using the techniques learned in the training tapes, I put myself first in "Focus 10" and then went on into "Focus 12." I began thinking of flying and before I knew it, I felt myself passing through the ceiling over my head and floating around in our landlord's apartment above us. I had never been in this apartment, but I clearly saw a green carpet and a floor lamp with a red shade. The colors struck me as gaudy. I was there but a brief moment before snapping like a rubber band back in the body. I thought it was my imagination until, a few days later when I had an opportunity to visit the upstairs apartment. And there was the green carpet and red lamp shade, just as I had envisioned it.

After this I was eager to do some more experimentation. My next trip was from our Springerville bedroom into the Show Low apartment. It was late in the afternoon and I found Jennifer busy at some task at the kitchen counter. She was alone. I noted the time and all of the details of what I saw. When I asked Jennifer about it a few days later, she said she thought she was working at the counter at the time of my visit. But that was so inconclusive I was not satisfied.

My next experiment was a bit bolder. It was early in the evening when I went to visit Zona, the woman I worked with in the newspaper office. I knew little about Zona, except that she had two little children and lived in a mobile home somewhere in Eagar. Zona was not at home. Instead I found a stranger playing on the living room floor with the children. The next day I cautiously told Zona about my visit, and my experiments with leaving the body. While I am sure she did not believe my story, she seemed shocked that I might be able to spiritually fly into her private life unannounced. But she told me that what I claimed to have seen was probably accurate. She said she was out for the evening and had a baby sitter watching the children. She said this girl usually enjoyed sitting on the floor and playing with the toddlers.

I used the special tape to get out of my body at first. But after this, I discovered that leaving the body is a relatively simple thing to accomplish. I simply put myself into the mental state of Focus 10 and float up and out through something envisioned as a trap door in the back of my head. Once free I can go anywhere, and arrive almost instantly.

Unlike the experiences reported by people in emergency rooms, when I go out of the body I rarely stop at the ceiling of the room I am in. I usually catapult up and out with such force, I find myself in the sky high above the building and sometimes the town I am in. I have to bring myself back down into the room if that is where I want to stay.

Early impressions when you leave the body are quite foggy. You sometimes are not sure of what you are looking at. The more you do it, however, the more clearly focused the things around you become. It is comparable to day dreaming. Sometimes I wonder if a day dream isn't actually an out-of-body flight, especially when we are children.

The wonderful thing about leaving the body is that you can visit anywhere, either in this world, in the universe, or on another dimension. And you can get where you want to go almost as soon as you think it. I tried to visit other planets and other places in the universe, but got little satisfaction there. The problem with traveling off like that is that you don’t have the foggiest idea what you are looking at.

What is more interesting is meeting a variety of other life forms. Some of them are aliens from other worlds and other dimensions that live on what we call the spiritual, or astral plane. Another term for them is sub-space beings. We are the only life forms I know of that exist in this three-dimensional world.

I also saw what I thought were angels. That is another story.

Early in my astral explorations, I encountered a shapeless white glittering life form that seemed anxious to communicate. It tried very hard to assume a human shape, perhaps to assure me that it was a living creature and friendly. Its attempt to look like me was not very successful. The best it could do was to take on the form of a living gingerbread man, without shape or substance. It seemed like a pulsating form of intelligent light and energy. We communicated through thought images, just as taught in the Monroe tapes. When I first encountered this being, my mind was blasted with images of fire, destruction and smoke. I was sure it was warning me about the future.
​
My second and final visit with this same creature occurred the following day. It seemed pleased to have me as its guest and took me on a wonderful flight through the astral. We flew, tumbled and rolled together in play until the tape ended and I was zapped back into my body. After that I never encountered this entity or another like it again.