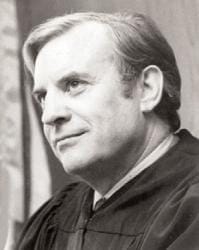 Among the outstanding characters I became acquainted with over the years is Judge James Lincoln, a man born and raised in my hometown of Harbor Beach, Michigan, who went on to have a dynamic impact on Michigan and especially the City of Detroit.

A giant of a man, Lincoln lived a life of gusto, plunging into everything he did without reservation. He was a tackle for the Michigan Wolverines football team while attending University of Michigan in the 1930’s. He went on to acquire his doctorate at the Detroit College of Law in 1943.

Somewhere during this period Lincoln served as a legal apprentice with U.S. Supreme Court Justice Frank Murphy, also a native of Harbor Beach.

While practicing law in Detroit Lincoln made an unsuccessful run for Detroit Mayor but lost to the incumbent, Albert Como in 1953. The following year he won a seat on the Detroit City Council and remained on that post until Michigan Governor G. Mennen Williams appointed him to be a probate court judge. He later was assigned to serve as a Detroit Juvenile Court judge where he served until his retirement in 1977.

That was the point where my path crossed with Lincoln’s. He decided to move back to Harbor Beach and made a dramatic way of letting everybody know he was back in town.

He and his wife, Kim, owned some shoreline property just south of Harbor Beach. The hospital bought several homes along South Huron Avenue with plans for demolition to make room for a major expansion. The Lincolns purchased one of those houses and moved it to their property. It was a large house and the move thus became a spectacular event worthy of news coverage.
I had a personal interest in this house since it had been the home of a former girlfriend, Susan Philbrick. I had spent some memorable times in that house knowing not only Susan but her family. Consequently I was glad to learn that the house would survive the fate of demolition.

As the house moved slowly down Huron Avenue, with workers carefully cutting away overhanging tree limbs and temporarily removing overhead street lights, Lincoln strutted along behind it, wearing a broad Stetson hat, dungarees and cowboy boots and puffing on cigars. I followed along snapping pictures, chatting with Lincoln and getting my story.

A year or two later I got word that Lincoln was researching the Great Fire of 1881 that swept the Thumb Area of Michigan. It had been a major historical event that was of interest to all of the natives of the area. Our own home on Filion Road, just north of town, contained supporting timbers that were left charred from that fire. Thus it was that I was back in Harbor Beach to interview Lincoln once more and get a story about his book research.

He was especially glad that I was doing the story because he was reaching out for relatives of the survivors of that fire for old letters, newspaper clippings and diaries depicting personal stories. Thus I indirectly helped him in his research because my paper, the Port Huron Times Herald, had readers throughout most of the burn district.

I think Lincoln and I were in touch more than once during this time because he began asking for “update” stories thus giving him additional chances to ask for public help in collecting fire data.

In the spring of 1981 Lincoln called my office and asked if I would consider writing his book. He said he had nearly finished the research and he liked the news coverage I gave him and the way I wrote. He said he was just assigned a new job by the governor to sit on a special judcial council. While he had written a couple of chapters, Jim said he realized that he was not going to have time to finish the book. Since it was the anniversary year of the fire, Jim was desperate to get the book finished and published.

I drove up to his home and we sat in the very living room where Susan Philbrick and I had spent so much of our time during my teen years. Only this time I was with Judge Lincoln, with piles of paperwork spread out all over the floor, talking about how we might tackle the book. That day I agreed to take on the project. It was a decision that changed my life.

That year I had been working at the Times Herald long enough that I earned a month of vacation time. I took the full month and spent it in my bureau office, using the company's electric typewriter and writing that book. Jim and I also spent some quality time visiting sites of interest that included graveyards, monuments and other things relating to the fire that could be photographed and described. We also followed the path of the fire as it was described in the old news clippings.

The book, which we named Fiery Trial, was not as thick as Lincoln expected. When I brought the finished manuscript to him he expressed disappointment at first. But after reading it he was satisfied that I had done a good job. He had written two chapters that I carefully incorporated into the manuscript and giving him credits. The story went into the cause of the fire, the fact that farmers were burning brush and the dead dried limbs and trunks from an earlier fire that swept the area in 1871, how the wind picked up and turned the small fires into a giant confligration that started in Tuscola County and swept northeastward before a 40-mile-per-hour wind. It was said the fire raced faster than a horse could run. To escape it people climbed down into their dug wells or got into nearby streams. Those living near Lake Huron dashed out into the lake with horses and wagons to get away from the flames. The smoke was so thick the day turned pitch black. Hundreds of people people perished.

A unique result of the fire was that The American Red Cross, which was just being launched by Clara Barton in New York, took on the Thumb District fire as its first official case.

Getting our book published became the next problem. Lincoln had connections that gave him the ear of the Michigan Historical Society. That organization agreed to publish a first edition of our book in hard cover. I think they produced 3,000 books. We had the books in our hands in the fall of 1981, almost at the anniversary of the fire. We then set about on a massive lecture and public relations circuit.

I used my newspaper connections to get stories published. We gave joint talks and split up to give lectures on our own all over the fire area. We gave books to local libraries and sold them at a retail price at our lectures. A lot of books went to book stores and were sold at wholesale. It did not take us long before the Historical Society was publishing another round of books. The second printing was all the society gave us. After that, I launched my own publishing business and republished the book in paperback. At least another 3,000 copies were sold before I left Michigan and turned my books over to a Lansing book publishing house.

My wife and I lived for a couple of years in Arizona before returning to the Thumb Area. I only saw Lincoln a couple of times after that. We met at Al's Restaurant in Harbor Beach one afternoon for a cordial visit. And we bumped into each other at a Bad Axe garage sale. He was still the same old Jim Lincoln, and still puffing on those big cigars, reaching out to the people in the community in the same outgoing manner I knew from the day we first met.

Other things about Lincoln that I found of interest: he was a Civil War buff and had a big collection of books and relics from that war. He was on the bench during the Detroit riots of the 1960's and later wrote a book, Anatomy of a Riot, in which he described the effect the riot had on the community.

Lincoln and Judge Frank Murphy, both from Harbor Beach, are the only men to have Michigan court houses named after them. The James H. Lincoln Hall of Juvenile Justice and the Frank Murphy Hall of Justice have this distinction.

When we rode the countryside together in his Cadillacs I recall choking on the cigar smoke. He was always puffing on them. I thought the cigars were going to kill him but Lincoln was a tough old bird. He was 94 when he died at his home in 2011.