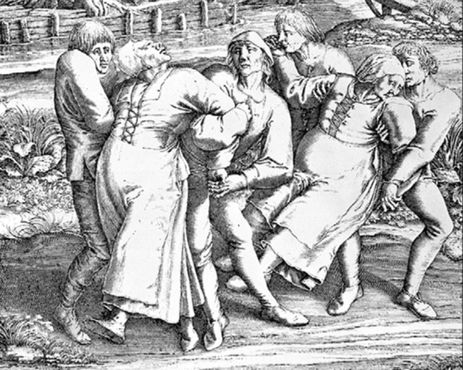 It happened in Strasbourg, France, in July, 1518. As the story is told, a woman named Frau Troffea began dancing non-stop in the street. Soon other people joined her. Within a week there were 34 people dancing without stopping, day and night. By the end of the month there were at least 400 people caught up in this strange crazed dancing.

The people danced until they began dropping dead from exhaustion, stroke and starvation. Even as they lay dying on the street, their legs continued to jerk and move as if they were still dancing.

This bizarre event has gone down in history as the dancing plague of 1518. Its cause has remained a mystery to scientists and medical people, although one historian, John Waller, has suggested some solutions in his book A Time to Dance, A Time to Die, The Extraordinary Story of the Dancing Plague of 1518.

Waller, a professor at Michigan State University, shows that historical records show that the Strasbourg events really occurred. The documents also indicate that “these people were not just trembling, shaking or convulsing,” he wrote. “Their arms and legs were moving as if they were purposefully dancing.”

The weird thing about the event was that it appeared that the dancers were unable to stop what they were doing. In fact, written accounts noted that they expressed fear and desperation because they could not stop themselves. So what might have caused such strange behavior….was it mass hysteria?

Some so-called “experts” of the time suggested that the dancers were stricken by poisoned rye bread, most likely ergot rye mold. But Waller noted that the mold is known to cause violent convulsion and delusions, but it would not cause “coordinated movements that last for days.”

Waller supports the mass hysteria theory. He argues in his book that the event happened during a time of great trouble. A series of famines brought on by extreme weather conditions plus epidemics of smallpox, syphilis, leprosy and other illnesses was making life unbearable throughout Europe.

All of this coupled with a Christian legend, that if anyone provoked the wrath of Saint Vitus, A Sicilian martyred in the year 303 AD, they would suffer plagues of compulsive dancing. Indeed, the disorder known today as St. Vitus dance, has been found to be a disorder in children that is associated with rheumatic fever. Its victims suffer uncontrollable movements, usually in the face or in the arms and legs.

Because the people of that time were illiterate and were full of fear and anxiety, Weller suggests that the people of Strasbourg were so caught up in religious dogma and superstition of the time that they succumbed to what he called “mass psychogenic illness,” a form of mass hysteria.

It is unclear just what caused Frau Troffea to suddenly step out of her house and start dancing wildly in the street, but once others began to join her, the hysteria spread throughout the village.

Waller said victims of this form of mass hysteria go into an involuntary trance, or altered state. “In groups subject to severe social and economic hardship, trance can be highly contagious,” he wrote.

Has anything like the Strasbourg death dance ever happened before or since? Indeed, it has. One report said there were at least seven other outbreaks like it in medieval Europe, many of them in areas near Strasbourg. In the 1840s an outbreak of wild dancing by young people was recorded in Madagascar. The dancers also were observed in a trance-like state. They were convinced that they were possessed by spirits.
​
None of these events resulted in the victims dancing themselves to death, however.