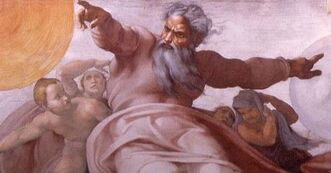 The Christian Bible is not only filled with gory stories of blood sacrifice, war and murders, but it depicts God as not only the creator but the mass destroyer of millions of humans. Theologians of course paste all of the stories together as a supreme lesson from the Almighty for the benefit of mankind. But in the end, it appears that mankind hasn’t learned much from the book except use it as an example for our own self-destruction.

When we boil it all down, the Bible contains some really ugly stories about the mass killing of a lot of people by a supreme being that gets pissed off at the way people on earth are behaving. Rather than attempting to fix their behavior with His magic wand, God just coldly slaughters them, sometimes by the thousands; other times by the millions. When He goes on a rampage, God leaves a bloody landscape in his wake.
​
We have to admit that God sometimes used some very creative ways to do his killing. In Genesis 7:21-23, He flooded the earth and drowned everybody, including the animals. If we can believe this story only a single family is allowed to survive to repopulate the planet. Of course the fish and sea creatures came out of that calamity quite well, so if Noah wasn’t successful at restarting a population, there was always evolution. But then the hard-line Bible thumpers say there is no such thing as evolution. Oh well.

In 2 Chronicles 13 there is a terrible story of a battle among the Israelites that led to the killing of a half a million men. It seems that a king of Jerusalem named Jeroboam rebelled against God. Another leader named Abijah rose up in Judah and established an army determined to overthrow Jeroboam. When they met on the battlefield, Jeroboam brought 800,000 soldiers against Abijah’s force of only 400,000. Miraculously God gave Abijah the victory. When the fighting was over, some 500,000 soldiers lay dead or dying on the ground. Obviously soldiers from both armies lay among the dead, although the Bible story does not make this clear. The point here is that the battle was instigated by God against Jeroboam because Jeroboam stood in rebellion against the Lord.

To this day the Jewish people celebrate Passover. This is a celebration of an event that occurred while Moses was attempting to convince the Pharaoh of Egypt to free the Israeli people and let them return to the "land of milk and honey." When the Pharaoh refused, God brought plagues. Passover was the silent killing of the first born children (and livestock) in Egypt on a single bloody night. The Israeli people were warned and escaped the swath of death by placing a mark of blood from a slaughtered creature on their doors. Thus when the angel of death saw the mark, he "passed over" those homes. There is no Bible count as to the number of people (and animals) killed at Passover, but it was obviously in the thousands.

After the escape from Egypt and after spending 40 years wandering in the desert, the Israelites finally landed in the territory that was allegedly given to them by God. But other tribes had already established residence there. Several large cities, some with walls standing around them, had been erected. Thus the Israelis are forced to fight for their "homeland." There are many bloody battles described in the Old Testament books as the armies are led to victory by God and leaving hundreds of thousands of Palestinians lying dead in their wake. The battles allegedly happened at Jericho, Heshbon, Bashan, and the Midianites and Amalekites. Everybody died except the women who were taken as sex slaves.

The Book of Numbers, Chapter 16, contains a story of Korah, a rebel in Moses’ and Aaron’s camp, who had a following of 250 elders in the community who wanted to take over leadership of the group. God opened up the ground and it swallowed all of the followers of Korah. When the Israelites complained that God was killing so many of them, God sent a plague that killed another 14,000 more. Imagine the job of digging all of those graves.

These are but a few of the stories of multiple slaughter of humanity by a "merciful God" as told in the Old Testament. Those books aren’t ones to read to your children before bedtime.