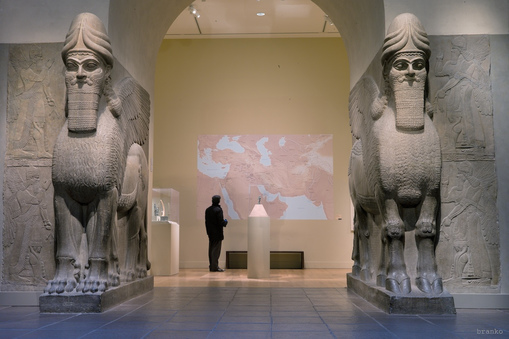 Erasing the History of Mesopotamia

With the Iraq death toll from the 2003 U.S. and UK invasion pressing 300,000 and counting the case for international criminal charges against former President George W. Bush and the UK’s Tony Blair is strong. But there is still another part of this wicked deed that has been somewhat overlooked by the public at large.

Military forces went out of their way to destroy and erase important archaeological sites that contained the historical record of Mesopotamia, believed by many to be a primary root of human civilization.

Writer Felicity Arbuthnot in a report for Global Research noted that the rich historical record of humanity “has been systematically, deliberately erased in one of the most devastating, despotic, desecrating, pulverizing cultural Armageddons in history.”

Arbuthnot wrote that even though the military leaders were given coordinates of all of the museums, monuments and important archaeological sites in Iraq the armed forces appeared to purposefully bomb and bulldoze their way across the country without considering these important places. They flattened the site of the famed Hanging Gardens to establish a military base. They leveled the ruins of the ancient City of Ur, the birthplace of Abraham to build a helicopter landing pad.

Soldiers looked the other way as vandals sacked the museum in Baghdad that contained priceless artifacts. Great historic structures were demolished by troops using the sites to explode captured weapons. Arbuthnot said Babylon was rendered archaeologically barren by the U.S. and British assault.

The ancient city of Nimrud was bulldozed. This site contained the remains of the palace of Ashurnasirpal, King of Assyria. The entrance to the palace was well known because it was guarded by human headed bulls and lions with hawk’s wings. The massive carved stone monuments survived region warfare for nearly 3,000 years before the Bush/Blair criminal invasion occurred.

Also destroyed was the Temple of Nabu where the son of the Babylonian God Marduk once reigned some 800 years BC. Marduk is referred to in the Old Testament as Nimrod, “a mighty one in the earth” the leader who built the City of Nineveh and established the Kingdom of Babel.

All of the ruins, the records and proofs of the existence of the people who settled this part of the world and established what is historically remembered as the Cradle of Civilization have been destroyed.

The Guardian quoted historian Tom Holland as calling what was done there as “a crime against Assyria, against Iraq and against humanity. Destroy the past and you control the future. The Nazis knew this, and the Khmer Rouge – and the Islamic State clearly understood it too.”
​
While the crimes committed by these two national leaders have been carefully covered up for political reasons, the day may soon be coming when the world will openly mark the names of both Bush and Blair for their evil deeds. Even Hitler stopped short of destroying the Babylonian ruins.