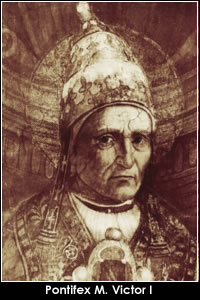 The Roman Catholic Church “beautified” Pope Pontifex M. Victor I and Pope Benedict XVI declared him a saint in a presentation to the Roman Curia on December 21, 2012.
If church teachings are correct, the act probably yanked Pope Victor from the fires of Hell by declaring “all sins and evil acts performed forgiven.” That is because Victor, possibly the third man to act as the world’s “Pope” after Paul, during the years 193 to 199, turned out to be among the lineup of extremely wicked men.

This is the story outlined in the website One-Evil.Org which carefully outlines the progression of the Roman Catholic Church in a dramatically different way than official church records state. The authors declare that "the research on this site therefore refuses to adhere to this false and deficient system" that has existed at the Vatican since Constantine transferred authority over the Roman Empire to the Pope in the Eighth Century.

While the church names a constant sucession of "Popes" seated at the Vatican beginning with Paul, One-Evil.Org claims the first "religious" origins of the Catholic Church did not begin until Pope Victor I came to power with the help of the Roman Emperor Severus in the year 193.

Following is the story of Pope Victor I, the way the writers for One-Evil.Org perceive it:
It wasn’t Catholicism in the second century following the life and death of Jesus, but rather they called it the cult of Paulinity, since it was founded based on the letters and teachings of Paul. After Lunis allegedly followed Paul as head of the early church, there was a dry spell of 129 years before an ugly version of the church rose up. The early followers of Paulinity by then were members of a pagan trinity cult of Rome and Cybele that conducted child sacrifice and satanic rituals.

It was said that tens of thousands were murdered to enforce Victor’s struggle to head the “one church.” But that church was dedicated to blood sacrifice, demonology and power.

Pope Victor was born Gaius Fulvius in about the year 126 in the old Phoenician city of Neapolis, in a territory now located in Libya, North Africa. The family was forced out of Rome after Emperor Domitian declared human sacrifice a capital crime. Victor’s father, Fulvius Pius, belonged to a wealthy and distinguished ancient family who was involved in Paulinity.

The Paulinity cult went underground where it grew in popularity. Because of the Domitian declaration, the exiled Fulvius clan carried a deep seated hate of the real faith of Jesus and Gnosticism and the Antonine dynasty of Emperors. Thus there was motivation for Gaius to challenge the very power of Rome.

He began his rise to power when he came up with a plan to write a proper liturgy for Paulinity. He created his doctrine written completely in Latin.

In the year 193, when Gaius was in his 60’s, the Emperor Severus came to power and lifted the ban on Paulinity as a capital crime. Because Severus either supported or belonged to the Paulinity sect, Hippolytus, who was teaching the true message of Jesus at the Gnostic school of Valentinius was exiled from Rome.

Severus then ordered the reopening of the Great Temple of Cybele on Vatican Hill, and granted the temple to Gaius. Gaius appointed himself Bishop of Rome, thus becoming the alleged first or second Pope to sit at the temple on Vatican Hill. He gave himself the name Victorius, which is recorded as Victor in church records.

The historical record is vague about the first Pope Linus and it is likely that Victor was really the first man to declare himself bishop of the Roman cult. Pope Victor published Liber Pontificalis, described as a fraudulent history of the “church." He also demanded that all Christian sects throughout the empire recognize him as their supreme authority.

Within a few years Victor and a team of scribes completed a new doctrine for the cult. Copies were sent to the heads of Eastern Orthodox Christians, demanding that they adhere to the “official liturgy of the Mother Church.” Much of this liturgy is still in effect today. Victor established the date of the crucifixion, aligning it with moon cycles and the ancient “Day of Blood” a date celebrated by pagan and satanic cults and named after Eostre, a Norse name for the god Cybele. Thus we have the modern name Easter.

Victor also brought child sacrifice back into church ritual, as it was under the pagan rituals of Cybele. Instead of once yearly, the sacrifices were held monthly and sometimes weekly. Victor infused the celebration of the last supper and death of Jesus as a ritual demanding human sacrifice of an innocent.

If that wasn’t evil enough, Victor demanded another new liturgy that called for ritual incest.

When the other religious groups refused to comply with Victor’s draconian liturgy, he turned to Severus with demands that the Emperor “eradicate the heretics.” Severus complied and in the year 198 he declared that conversion to either Judiasm or Boethusianism (a form of worship of Jesus) was a capital crime. Thus began a mass slaughter of religious believers who refused to accept Victor’s heinous doctrines.

Pope Victor died in 199 at the age of 73. He was succeeded by his son, Pope Zephyrinus.

As stated above, the official Catholic version of Pope Victor’s story is radically different. The church claims that the Severus edict against church believers wasn’t issued until 202 or 203, when Zephyrinus was the Pope. The story claims that Hippolytus was still alive and an influence in the church, and he was critical of Zephyrinus for failing to assert authority and repressing heresies.
​
It is unclear from church written history if the slaughter of the believers continued under Zephyrinus, who enjoyed a 17-year pontificate.