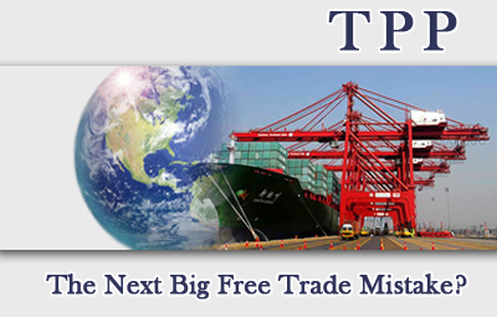 Falling Into The TPP Trap

That controversial Trans-Pacific Partnership (TPP) appears to be rushing its way through Congress and the U.S. Senate and if it makes its way to President Obama’s desk, it is sure to become a legal document within weeks.

This may or may not be a good thing. What is so problematic about TPP is that it has been such a secret proposal for regulatory and investments between twelve participating countries that even the legislators who are voting to approve it, don’t really know its parameters.

The few who have been given access to the TPP agreement are not allowed to do anything more than go into a guarded room and read though volumes of legalese, unable to take notes, photograph pages, or go home with copies that can be studied more carefully.
If approved, the United States will be locked into a new type of free trade agreement with eleven other nations, Australia, Brunei, Canada, Chile, Japan, Malaysia, Mexico, New Zealand, Peru, Singapore and Vietnam.

As Los Angeles columnist and television personality Sonali Kolhatkar wrote this week for TruthDig: “For decades now, we have heard the claim that free trade is equivalent to freedom in general, that if corporations were allowed to freely do business around the world without having to contend with tariffs, regulations and other so-called trade barriers, it would naturally result in an equal playing field and prosperity for all.”

Indeed, this is what President Obama and his staff are arguing as they openly promote adoption of the TPP agreement. But the fact that the document is massive, is laced with fine print loaded with boiler plate and legal jargon, and is being kept from the public eye, makes us extremely suspicious.

We remember how our legislators quickly approved the Patriot Act just 13 days after the 9-11 attacks. It was a detailed document containing 1,016 sections, and would have been impossible for anyone to have produced within less than two weeks. It was obviously drafted long before the attack. It stripped Americans of many of their constitutional rights, giving government and the police the right to violate rights of free speech and privacy and to conduct secret searches and surveillance in the interest of fighting terrorism.

We are still smarting over the U.S. Supreme Court’s decision on the Citizens United case that declared corporations to be people with the right to contribute large sums of money for political campaigns. That decision put most of our legislators directly in the pockets of wealthy corporations and individuals. They now vote for big business rather than for their constituents.

With these thoughts in mind, how can we trust anyone in Washington to do the right thing for the people when it comes to TPP? We have this nagging sense that TPP is designed to make big business even richer and the poor people of the world even more subservient to the rulers than they already are.

In her column, Kolhatkar noted that there are better “paths” to helping revive the prosperity of the middle-class. She listed raising the minimum wage, enriching the safety net for the poor and elderly, removing “freedom to work” state  laws that are destroying unions, offering free quality higher education, removing student loan debts, and creating a single-payer health care system.

“All of those direct simple pathways to economic freedom have been proved to work in various capacities in countries such as Canada, Sweden, Norway and others. And none of them requires secret negotiations,” Kolhatkar wrote.

She quoted Ann Jones, who wrote in the Los Angeles Times that “Americans are ‘crazy’ to reject the Nordic model of socialism, which she described as ‘a balance of regulated capitalism, universal social welfare, political democracy and the highest levels of gender and economic equality on the planet.”

Indeed, Norway has established a winning economic formula that should be a model for the United States and nations around the world.