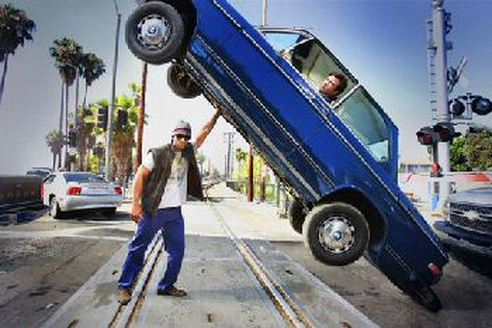 Those Moments Of Superhuman Strength

Tucson, Arizona resident Tom Boyle made headlines in 2006 when he physically lifted a car off of an 18-year-old biker who accidentally got struck and then pinned under the vehicle.

Upon driving onto the scene, Boyle lifted the front end of the car so Kyle Holtrust could be pulled out from under it.

We suspect that Boyle, although a hefty man of some 300 pounds who towers at over six feet in height, probably could not walk up to an automobile of similar weight and lift if off the ground today. There is something about emergencies and the adrenalin rush that accompanies an emergency that allow us all to accomplish amazing fetes of power when we find it necessary.

I write from personal experience.

Some years ago, when I was a young man, I took a job with an oil well cleaning company. The work was hard and sometimes quite dangerous, but the pay was good and there was something about the challenge that I enjoyed.

I was working with another man on a light line machine that we used to clean paraffin out of oil wells. For those who don’t know, paraffin is a substance in crude oil that collects inside metal pipes as the hot crude flows out of the ground and cools. Eventually, paraffin will plug a well so that it no longer flows from natural pressure.

One cold rainy day my partner, Ted Case and I were hooked up to a very nasty and spitting oil well near Reed City, Michigan. We had been “spudding” our heavy brush down into the paraffin-laced well for hours and making little progress, while a spray of crude oil blanketed us, our truck and everything around us. When we stopped for a lunch break, Ted attempted to start the truck to generate some heat. The truck backfired and the engine caught fire.

Anybody who has ever worked around oil wells knows that fire is a very dangerous event. We have seen wells burn out of control for weeks until specialists put out the fire with explosives. Hot fires like that leave everything around the well head scorched and blackened.

The moment we saw smoke and knew the truck was on fire we knew we were in big trouble. Without thinking I jumped out of the passenger’s side of that cab, grabbed a fire extinguisher that was attached on that side of the truck, and handed it to Ted. By the time I got to him, Ted had the hood up and he extinguished the fire.

After standing back and breathing a sigh of relief that we had saved our truck, the well from bursting into a blaze of hot flame, and probably ourselves, something started bothering Ted. He asked me how I got that extinguisher off the truck.

It seems that the company had been bothered by theft of equipment so the fire extinguishers were locked in place. Consequently they had to be removed by a key. A steel pin prevented their removal.

It appears that in the excitement of the moment, I snapped that steel pin and pulled the fire extinguisher free without realizing my own strength. To this day I have no recollection of how I got that extinguisher off the truck, or having any difficulty pulling it free.

I tried to pull extinguishers off company trucks several times after that, and I couldn’t ever do it.