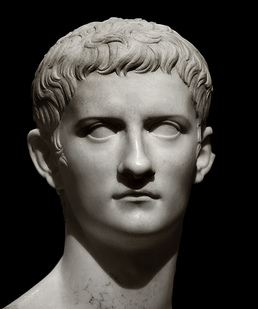 Among the worst rulers to have existed during the Roman Empire was the man they called Caligula. In the four years that he ruled, Gaius Caesar (his real name) was responsible for the murder of an undetermined number of political enemies, was married to four different women, a cross dresser and a psychotic who enjoyed chewing on the testicles of his victims. He forced families to come to the court to watch as their relatives were murdered.

For his amusement, Caligula enjoyed watching animals tortured and slaughtered. It is believed he was responsible for the death of about 150,000 animals. Many people of Rome perished of starvation.

While in power, Caligula exercised a ferocious appetite for sexual relations with women. He declared himself a god and forced men to send their wives to him for sexual pleasure. It was said that he even committed incest with his sister, Drusilla.

Four years of this guy was about all the Romans could take. On January 24, 41 AD, when Caligula was only 39, he was attacked by guardsmen who stabbed him 30 times and dumped his body into a shallow grave. His wife and daughter also were murdered.
The Roman Senate ordered the destruction of all of Caligula’s statues and attempted to erase his name from Roman history. But his deeds were so terrible his name went down in the records anyway. You can’t erase crap like that.

How did a nut like Gaius Caesar come to rule the Roman Empire? He was the surviving son of Germanicus, a once beloved leader of Rome, and the great-great grandson of Julius Caesar. But politics of the day were even more malicious are they are in contemporary America. Germanicus died strangely. Many believe he was murdered. Tiberius came to power next. Tiberius adopted Gaius Caesar and put him in line as a successor to the throne.

Tiberius was not a popular leader and the people at first welcomed Caligula when he came into power, even though he was only 24, had no experience in government, diplomacy or war. They hoped he had adopted the same qualities of his old blood line.

During those early months, it looked as if Caligula would be a good ruler. He freed citizens who had been unjustly imprisoned by Tiberius and he got rid of an unpopular tax. He staged lavish public events like chariot races, plays, gladiator shows and boxing matches.

Six months into his reign, Caligula fell deathly ill. When he recovered it was obvious that something had happened to his mind. He was tortured by headaches and wandered the palace at night. He began dressing as a woman. And all of the strange behavior, including the god-complex emerged.
​
A point of interest: The nick-name Caligula was given to him by his biological father because when he accompanied Germanicus on hunting trips he wore a special pair of small boots especially made for him. The name means "Little Boots." Today that name has gone down in infamy.