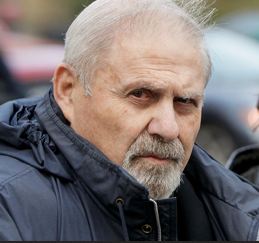 During the apartheid-era years, between 1971 and 1989, homosexual soldiers in the South African military were cleverly "flushed out" from the other troops and sent to Ward 22 in a military hospital at Pretoria for forced sexual reassignment.

Dr. Aubrey Levin, the man who directed this horrible assault, served a five-year prison term after a jury found him guilty of three charges of sexual assault against male patients in a hospital in Alberta, Canada.

Levin, now 77, is currently fighting a $1.4 million lawsuit by a Calgary man who claims he was forced by court order to be treated by Levin. Instead he said he was sexually assaulted. Levin's wife, Erica, has been found guilty of attempting to bribe a juror in the case.

During the apartheid period, Levin served as a Colonel in the South African Defence Force (SADF) and chief psychiatrist at the Voortrekkerhoogte military hospital. He was the attending psychiatrist at Greefswald, an isolated detention barracks where gay soldiers were supposed to have been "cured" of their vices.

Levin became notorious as an "aversion therapist" that attempted to cure both gays and lesbians of homosexuality. Between 1971 and 1989 an estimated 900 drafted young men and women were subjected to chemical castrations and electric shock treatment. Men were surgically turned into women against their will and then cast out into the world without receiving help for dealing with their new sexual identities.

Levin treated the mentally disturbed patients but he convinced the commanders that he could make heterosexuals out of gay men using what he called electroconvulsive aversion therapy. He began to focus on homosexuals and drug users. Commanding officers and chaplains were encouraged to get soldiers to "confess" and submit to Levin’s Ward 22 for "treatment."

An intern psychologist in the ward later said she saw a lesbian subjected to such severe electric shocks that her shoes flew off.

Levin eventually became chief psychiatrist for the entire South African military. At about this time he concluded that aversion therapy was a failure and he began using other methods, which included chemical castration and surgical body changes.

After the end of apartheid, the Truth and Reconciliation Commission of South Africa heard testimony about Levin’s "aversion project" but by then, Levin was no longer attached to the SADF and no longer living in South Africa.

One of the victims, who had been chemically castrated, testified that he was convinced that there had been a few murders of gay people that were completely covered up. He also told of being forced to participate in a gang rape of Angolan women, and how other gay soldiers were given hormone drugs.

Levin moved on to Saskatchewan, Canada where he was licensed by the College of Physicians and Surgeons and working at Alberta College. In March, 2010 the college suspended Levin’s license after a male student secretly filmed him making sexual advances to other men.

During a pre-trial hearing, police said as many as 21 men were claiming they were assaulted by Levin during private counseling sessions. He was tried on nine of these cases before the Court of Queen’s Bench in Calgary and found guilty of three.