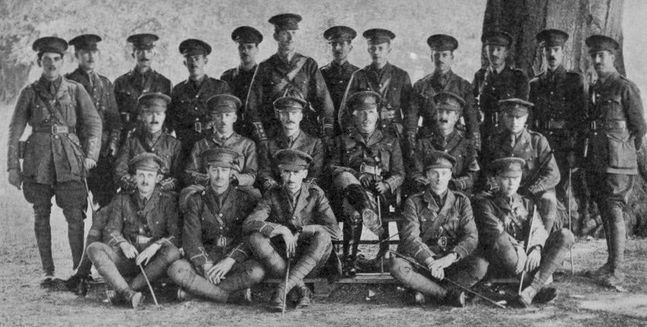 The Regiment That Disappeared At Gallipoli

There is a strange story out of the First World War concerning some 200 men from the Royal Norfolk Regiment that charged off into a cloud and never seen again.

As the story is told, the incident was witnessed by three New Zealand soldiers who watched the regiment charge under heavy fire toward a hill at Sulva Bay, Turkey, and then disappear when giant grey clouds dropped over it. This happened on August 21, 1915, during the fierce Gallipoli Campaign.

The witnesses said the soldiers marched straight into the cloud without hesitation. "No one ever came out to fight. About an hour later this cloud very unobtrusively lifted off the ground until it joined other similar clouds. Then they all moved away northwards."

After the Turks surrendered they denied any knowledge of the lost regiment.
The historical record notes that the Norfolk Regiment was comprised of 250 men and led by Sir Horace Proctor-Beauchamp. It had arrived at Suvla Bay on August 10 aboard the SS Aquitainia to join the intense fighting which was already going on.

The men were tired from the rigors of being crammed on the troop ship, suffering side effects from inoculations and lack of sleep, some were sick from dysentery and all were suffering from the harsh hot climate. It was in these conditions that they joined in the fighting. And there was confusion about the mission. Consequently the regiment went the wrong way and got separated from the larger 163rd Brigade.

Even though separated, Beauchamp and his men took up the fight. They were facing a maelstrom of machine gun fire and sniper attacks when they charged into what one account said was a smoke-filled forest. That was where the men, all 120 of them, went missing. Not one member of that battalion returned to tell the story of what happened. By all accounts they just vanished from the face of the earth.

Years later, Frederick Reichardt, a New Zealand war veteran, and two of his companions, told their story of what happened. It wasn't a smoke-filled forest where the battalion disappeared, but rather an odd cloud.

In a story that appeared in the autumn 1965 edition of Spaceview, a UFO magazine published in New Zealand, Reichardt said he and his companions saw from six to eight odd, gray-brown "loaf shaped" clouds hovering over the battlefield near where he was engaged. While there was a wind blowing he said the clouds remained completely still. The larger cloud was hugging the ground over a dry creek bed when the Norfolk Regiment approached and marched right into it. The soldiers never came out the other side.

After that, he said the cloud slowly rose up to join the other clouds and all of them moved off together in a northerly direction until disappearing from view.
It was assumed by the brigade command that the battalion had been captured by Turkish forces and were held as prisoners of war. But after the war, when the British inquired with the Turkish government about the battalion, the Turks denied having them.

The War Graves Commission carried out searches for war dead on the battlefields in 1918 and recovered 14,000 bodies of an estimated 36,000 that died in that terrible conflict. Some of them were believed to have been members of the Norfolks battalion.

Author Nigel McCrery, who conducted a careful in-depth investigation into the legend of The Vanishing Battalion and put his findings in a book by that name, uncovered the fact that over 120 bodies of men wearing the shoulder flashes identifying them as members of the missing regiment were found on that battlefield. But all had been shot in the head execution style.
​
McCrery's findings thus suggested that the entire battalion had been brutally massacred by the Turkish soldiers and their bodies left to rot.