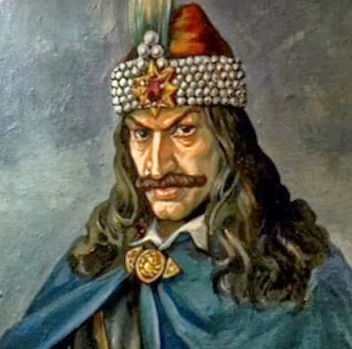 There really was a man named Dracula. Forget the Hollywood version though. He wasn’t a vampire but his evil deeds in his native Transylvania were the inspiration for the contemporary vampire stories.

It was rumored that Vlad Dracula sometimes drank the blood of the people he killed. He earned a nickname as "Vlad the Impaler" because impalement was his favorite way of murdering people. He would have a horse attached to each of his victim’s legs and a dull stake forced up through the body, from the anus to the mouth. It was probably the most painful type of death because the victims didn’t die right away. They sometimes suffered for hours and even days.

It was said that Vlad also impaled children, babies and even animals. He liked to eat and drink around the bodies of dead and naked people still impaled by stakes. He also poisoned, blinded, strangled, hanged, decapitated, stabbed, disemboweled, skinned (alive), hacked, dismembered, burned, boiled, scalped, roasted, and buried people alive. He enjoyed cutting off people’s body parts, especially their sexual organs. He roasted children and forced their parents to eat them.

If the stories were true, Vlad Dracula was perhaps the most twisted and wicked person who ever lived. And he had the power to do these things because he was born into royalty. The son of Vlad II Dracul, he was born in 1431 in Sighisoara and given the name Vlad III. The father was married to Princess Cneajna of Moldavia at the time, but he kept several mistresses so it was unclear just who Vlad’s mother was.

In a peculiar twist of history, the name Dracul, which meant dragon, was given Vald’s father by the Holy Roman Emperor Sigismund because he joined the Order of the Dragon, a fellowship of knights sworn to defend Christendom against the Moslem Ottomans. The name Dracul, of course, has since been distorted as "Dracula" with very dark connotations.

Vlad rose to power and became prince of Wallachia between the years 1448 and 1476. He led armies in battle against Ottoman forces. Some historians say the Vlad III may not have been the malicious killer as told in the stories about him, but rather used the technique of impalement and stories of his cold-hearted killings as a way of throwing fear into his enemies.

Romanian and Bulgarian writings from 1481 and later portray Vlad III as a hero that used his harsh methods to reclaim his country from the boyars. All of his military battles were directed against the Ottoman Empire, which was out to conquer Wallachi.

Still, Vlad III has been credited with the violent deaths of some 100,000 people during his years of power.

There are varied accounts of Vlad’s death. One of the most common stories was that he was decapitated by the Turks in 1476 as a trophy. His head was displayed on a stake to show the people that he was dead.