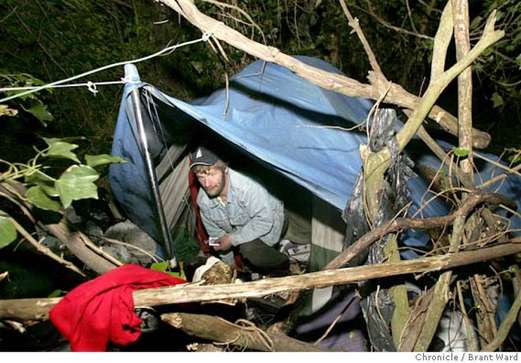 Homelessness seems to drive people into a state of insanity. We saw all forms of this during the summer of 1996 when we were among the people of the forest in and around Sedona, Arizona. Among the more interesting characters was the young man who temporarily came to live in our back yard.

I don't recall his name, not that it even matters. For the sake of the story we will call him Sting. Everybody in the forest went by these kinds of nicknames so, for all I know, it was his forest name. We found Sting sleeping on the concrete floor of a garage adjoining our cabin. Thin to the point of emaciation, possibly an AID's victim, he was but a pitiful thing to look upon. My wife, Doris, immediately extended her kind heart to offer him help. I prepared a pot of spaghetti that afternoon and there was plenty of it to go around. She sent me out with a large plate of it, laden with our rich sauce and cheese, and we immediately established a "friend." Before the day was out, Sting was in our modest home, happily chattering away about his strange life in the trees.

Sting explained that our landlord had hired him to do some odd jobs on the property and while working there, he was allowed to pitch his tent and live in the yard. He said he was sleeping in the garage because he hadn't yet brought his tent out of the woods. This new location, he said, would give him a temporary respite from the constant harassment from the national forest rangers, who spent most of their time driving the homeless people from their camp sites and issuing citations for "breaking the law." There was a legal eight-day limit for campers in the forest so anyone staying longer than that was cited and fined. The courts attempted to collect a hundred dollars for each citation, which was an impossible sum to be paid by the homeless. While some had menial jobs, many others were unemployed so the wood dwellers were generally fugitives of the law. That these people had no other place to go, and some of them were walking into town each day to pump gasoline or clerk the stores. That they endured these hardships to serve the wealthy people that owned the community seemed terribly unfair.

It did not take us long to discover just how peculiar Sting was. He began talking about the lay-lines of the Earth, and how he could see them everywhere. He said they were like dark lines streaking around the planet, crisscrossing everywhere. Each line, Sting explained, was an energy field. Not only could Sting see the world's lay-lines, but he claimed he had the ability to use the energy in them to accomplish certain magical acts.

Our daughter Jennifer happened to be visiting for the weekend while Sting was around, listened to his story, and got interested in his so-called abilities. He demonstrated his power by mentally visiting her Mesa apartment. He described it quite accurately, which suggests that he had the ability to leave his body and travel about. Sting told her that the energy was wrong there. He identified Jennifer’s roommates as contemporary vampires, or people who intentionally sap the energy of other people. Because of this, he said, Jennifer was constantly tired and drained. Jennifer agreed that Sting was pointing out something that she already subconsciously knew, but had neglected to do anything about. When she returned to her apartment on Sunday night, she arranged for her roommates to move out. She said her situation immediately improved.

Even though I considered Sting to be mentally unstable, I did not feel he was dangerous, and actually enjoyed the few days we spent with him. When it was time for him to move his gear back into the forest, I helped out. We loaded his tent, his bedroll and other personal items in our car, and I drove him to a point that he said was a short walking distance to his camp-site. It turned out to be a rugged hike that took us down the edge of the rock to a dried river bed. We followed the rocky bed for several miles, passing places that Sting identified as the living quarters of some of his friends. While they appeared invisible to me, I was able to get an occasional glimpse of a part of a tent or piece of cloth, possibly somebody's shirt hanging in the sun to dry, at some point in the trees.

There were few markers in the woods to indicate that I was in the midst of a literal city filled with homeless people, all of them skillfully hiding from the authorities who hunted for them daily. I saw few markers except one. All along the route we kept finding interesting stacks of stones, all carefully balanced on top of each other. They were obvious works of man, but they made little sense, other than possibly point out a path through the wilderness. Sting explained they were made by Stone Boy, one of the homeless people who considered the rock formations his personal kind of art. He was constantly making them where ever he went. I have since seen those stacks of stone since leaving the Sedona area, and I suspect that Stone Boy moves around. I have no idea what he looks like, or what his real name is. But I recognize his work.

Sting left our yard, but Doris extended an invitation to return when he wanted to visit, get a hot shower or needed a warm meal. Sting returned a few times after that. He came one afternoon when I was busy helping a neighbor write a press release for a Hopi delegation tour to Peru. Sting asked if he could take a shower. It was inconvenient for me to leave my project at the moment, but I thought by then I knew the man well enough to trust him, and gave him permission.

That night Doris worked late. When she prepared for bed, she discovered that her personal pillow was missing. In its place was a foul smelling old pillow, stuffed in her pillow case. It smelled of mildew and urine. She was pretty angry about that. Somehow Sting had switched pillows while left alone in the house.

We disposed of the smelly pillow. Needless to say, we never saw Sting again.