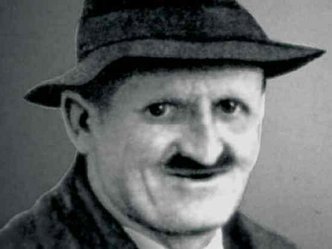 Alois Irlmaier was a dowser and well digger who lived in Freislassing, Bavaria. He gained fame because of his psychic abilities. Some accused him of being a warlock. He was born in 1894 and died in 1959.

Irlmaier who used his clairvoyant skills to help people locate missing friends and family members. His fame, however, grew from his prophetic visions of a third world war, an attack on the Vatican that causes the Pope to flee, a revolution in Russia, a terrible event involving three days of darkness, a warming climate and the sinking of three large cities under the sea.

Irlmaier said the images of future events appeared to him like a movie. A lot of information came to him as numbers and he said he could not understand much of what he saw. He predicted his own death in July 1959. Before he died he said: “I am glad that I can go now because I won’t have to experience what I see.”

Following are some of his most spectacular visions, recorded in his own words. In many cases Irlmaier admits that he does not understand what he is seeing.

“The Third World War will come, but I cannot predict the year. It will be preceded by signs in the skies, which will be seen by millions of people. War will begin on a rainy night, shortly before harvest time when the ears are full. War will begin after the assassination of an eminent politician in Czechoslovakia or in Yugoslavia. An invasion from the East will follow.

“I see two men who will kill the ‘third high-ranking person.’ They will have been paid to do so. One of the murderers is a small black man, the other is a somewhat taller white man. It could possibly happen in the Balkans, but I’m not sure about it. Prior to the war there will be a fruitful year with good vegetable crops and plentiful fruits. After the murder of ‘the third’ war will erupt without warning during the night. I see dust, and I see three numbers. Two eights and a nine. I do not know what the numbers mean, nor do I know the date and the time.

"While the Bavarians sit at a card game in Wirthaus, the strange soldiers will look into the windows and doors. A totally black column of people will come from the East. Everything goes quite quickly. From the Golden City (Prague) it moves out. The first worm goes from the blue waters of the Danube northwest to the Swiss border. By Regensburg there stands no more bridge over the river, but southerly from the blue water they will not come. The second great push will come over Saxony westward against the Ruhr. The third army column from the northwest will go westward over Berlin. It all goes very quickly and fast. From the Danube to the coast will be controlled by the Grays. Two fleeing refugee groups will cross the river; the third is lost and encircled by the enemy. Munich, South Bavaria, and Austria need not have fear.

"The enemy headquarters will be a red-roofed monastery, whose altar faces north.

"I see the earth like a ball in front of me, above which only white clouds fly. Ten thousand doves rise out of the sand and fly over us, but they do not drop down. But there where the headquarters of the others are, they throw black boxes, 25 centimeters high; there everything is wiped out.

"Then the movement moves to the north and cuts off the third army.

"The "Great City" of the United States will be destroyed by rockets, and the West Coast will be invaded by Asians, but they will be beaten back...

"Then it rains a yellow dust in a line. The golden line. The Golden City of Prague will be destroyed; it starts there. It continues in a straight line to the sea by the bay.

"The tanks drive, but those who sit inside are covered with death. There where it (the dust) falls, nothing will live. No trees, no flowers, no animals, no grass. Everything will wither and turn black. The houses will stand.

"What it (the dust) is, I don't know and cannot say. It is a long line. He who crosses it dies. The soldiers of the east cannot cross to the West, and the soldiers of the West cannot cross to the East. The wind blows the deadly cloud to the East. Suddenly the eastern armies collapse. They throw away everything they carry with them and try to escape to the North. But none of them will return.

"But by the Rhine things will be finalized. From the three army movements not one soldier will be able to return home. There will be so many dead... thousands of bodies black, the rotting flesh falls from the bones.

"Then comes a single aircraft from the East. It throws a "neutralizer" in the great water by England. Then the water lifts in one single piece as high as a tower and falls back down. It makes an earthquake and a giant wave and everything will be over-flooded. Almost all of England and the European coast to Berlin will sink except for a few mountain peaks.

"Simultaneously, a new land will arise which existed earlier (Atlantis?). Three great cities will sink. One through water. The second will sink, and the third just falls apart. The city with the steel tower (Paris?) will be set on fire by its inhabitants and will be leveled to the ground.

"Also in Italy it will be very bad. All priests except six will be murdered. The Pope will flee.

"Then from "K" (Koln?) flies out the flaming tongue up to the Northwest, West and South. Only once will the tongue fly so shortly, then burns a small town north of Sauries.

"The Munich people will not have much happen to them, but there will be a little distress. But a great famine will come and will take the animals from the farmer. Then the farmer really has to set himself to the task, for they will try to steal the very underwear off of him.

"Simultaneously, there will stand up a large man, and at that point the war stops. The whole thing does not take very long.

"The bearded people of seven yesterdays will finally end and their enemy will flee. On the riverbank they will camp and fight with desperation. There, however, their might will be annihilated, their power broken, so that hardly one will remain alive to return home to report their defeat.

"I see three things, be they three days, three weeks, or three months, I don't know.

"In Russia a new revolution will break out, and a civil war. The dead bodies will be so numerous that they will have difficulty removing them from the streets. The Russian people will begin to believe in Christ and the Cross will be honored once again.

"The leaders will kill themselves, and in the blood the blame will be washed away. I see a red mass mixed with yellow faces. I see a total uprising and a horrible massacre and plunder. Then they will sing the Easter Song and burn candles before pictures of Mary. Through the power of the prayers of Christianity, this Monster out of Hell will die, and even young people will begin to believe again the Virgin Mother of God.

"It will become dark on one day during the year. Then a huge thunderstorm will appear with bolts of lightning and thunder and an earthquake will move the earth. Do not go out of the house. No lights will burn except for candle lights. The stream of people stops. Whoever inhales the dust will develop cramps and die. Do not open the windows. Hand the windows with black paper on the glass. All open water will become poisonous, and all open food which has not been canned. Also all foods in glass will not make it.

"Outside, the dust moves. Many people will die. After seventy-two hours everything will be over. But I will say it you again, do not go outside, do not look out of the window. Let the candles burn, keep watch, and pray. Overnight more people will die than in the combined two world wars.

"Thereafter the Pope will return and the first great ‘Te Deum’ will be sung in the Dome in Cologne. Then he will crown three kings, a Hungarian, an Austrian, and a Bavarian. The Bavarian is an old man with white hair, and he wears lederhosen. In the beginning there will be famine, but then the Danube returns to its level, thereafter there will be so many groceries brought up the Danube that all will be fed.

"During this time the climate will change. It will become warmer, and the southern fruits and grapes will grow very well in Bavaria. And people will move there, who want to, and everybody can live where they want to and have as much land as they can handle. The land north and east of the Danube will be resettled. There are only a few people left. Then the traveling salesmen will say, buy my wares, or I will go crazy. The sausages will spill from the plates, there will be such an abundance. There will come a long, happy time, and those who live to experience it will be very happy...