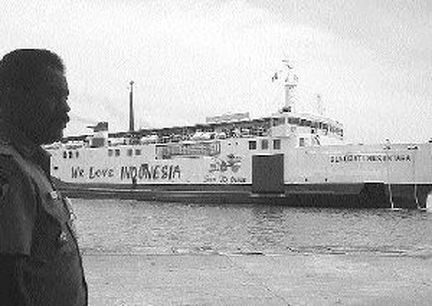 The story of the Senopati Nusantara has been a textbook case of negligence on the high seas in a nation that has neglected strict rules governing ships that transport human cargo.

The 16-year-old vessel was on the final leg of a 49-hour journey from Kumai in Central Kalimantan to Semarang, Java, when it capsized and sank in a violent storm. While reports varied, it was estimated that the vessel was overcrowded with 542 passengers and 57 crew members. The vessel owners said the Japanese-built ship was in good condition and had a capacity for up to 850 passengers.

They said the ferry ran into trouble off Mandalika Island, about 190 miles northeast of Jakarta. The storm packing 12-foot waves ravaged the vessel for hours before the captain radioed a distress call. He said the ship was severely damaged and capsizing.

One survivor told of panicking passengers fighting for life jackets as the Senopati was capsizing under their feet. The ship sank at about midnight Dec. 30, after being pounded by the storm for more than 10 hours. The man said the vessel veered to one side, and things started falling over as it tipped on its side and sank. He went under with the ship, but fought his way out of the wreck and to the surface where he climbed into a lifeboat with about 30 other people.

A fleet of navy ships, fishing boats and aircraft scoured the disaster area for several days. By Sunday afternoon, 177 survivors had been located. Many were in the water, clinging to pieces of wreckage or packed into life rafts. Others were found on beaches of some of the islands in the archipelago after they swam or were washed ashore. At least 66 bodies were found.

Miraculously, 14 survivors were rescued after surviving nine days on a life raft. They drifted almost 370 miles before they were rescued by a passing ship at sea. As of that date, there were 245 survivors, with another 400 still unaccounted for.
​
Ferries are a main source of transportation in Indonesia, a vast archipelago of more than 17,000 islands with a population of 220 million. Overcrowding and poorly enforced safety standards mean accidents are common.