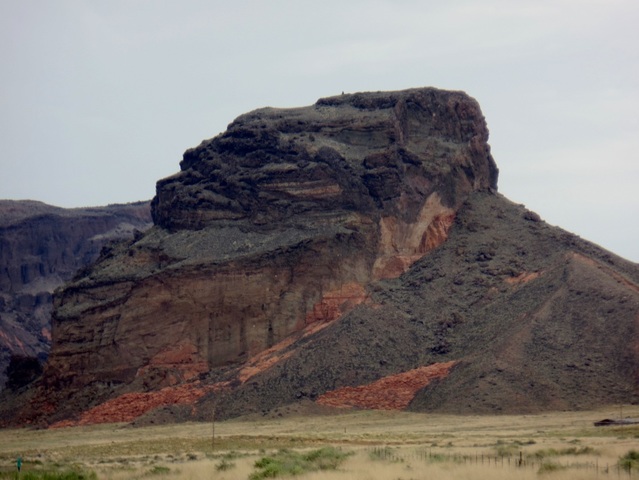 The strange mesa formations that dot the Navajo landscape in northeastern Arizona are no mystery to the natives who live among them. They tell stories about how the rocks rose from the earth, driven by some mighty force under their feet. They say it was the Mother Earth herself who spawned them.

That explanation is as good as anything geologists have come up with. Stories about volcanic action or wind and water erosion don't seem to fit. Close examination of the mesas show them to all be at similar height, a section of earth thrust hundreds of feet high, some with flat tops evenly covered with about the same kind of soil as the surrounding desert lands below.

They all have rugged rock piles along the sides that make them look as if they, indeed, were pushed upward like daggers from out of the dirt. Large concentrations of earth are piled along the sides of the mesas, as if pushed aside by a sudden upheaval when the rock was driven upward from ground level.

Among the latest formations said to have appeared is the well-known "Monkey Head" located along Reservation Route 6, leading north between Holbrook and Keams Canyon. Anyone who has driven this road is struck by the similarity this formation has to the head and face of the Hollywood creation King Kong. The great ape face has an evil grin as it looks off to the west. This formation can be seen from miles away. The road curves right under the face so drivers also get a close-up view. From up close, however, the animal features are lost and the mesa begins to look much like any of the others.

The Navajo use "winter stories" to tell how the mesas were formed. Back in the days before they had television and radio, and before the Europeans came, the people entertained themselves during the long winter months by telling stories. The fables were not only a form of passing time, but they were a way of teaching the tribal beliefs and culture to the children.

While the stories strongly resemble the fairy tales read to me by my mother when I was a child, I suspect they may also contain a small element of truth. If nothing more, they were an intelligent way for the people to explain a mystery that continues to baffle anyone who visits the reservation.

The Navajo say the Monkey Face mesa appeared unexpectedly about 300 years ago, trapping a Catholic missionary and a handful of native followers while they were enjoying a picnic on what turned out to be the top of the head. The way they tell this yarn, it is evident that they really believe it happened this way.

As the story goes, the place was but a small hill when the unnamed missionary and his tribal believers trekked to the top for their picnic. Prior to that it was considered a sacred place to the natives and the church group was warned about going there.

The priest laughed at native superstitions and encouraged his group of about a dozen believers to show the natives that there was nothing to fear. They defied the warnings, climbed the hill, and began the picnic. While there, however, a great earthquake occurred. When the rumbling and shaking stopped, the priest and his followers found themselves sitting atop the great monkey face. It was as if the earth made a joke out of their disregard for sacred things.

It seemed at first that the group would perish because they had no way of climbing safely down. Finally a pathway was found and everyone escaped. The Navajos say the way to the top still exists. It is well hidden but the way is still known to them. They keep it a secret. They don't want anybody else challenging the power of the sacred Mother.

Among the myths involving another rock formation located a few miles to the west is that of a young man who was invited home by a beautiful woman. She took the man to her bed that night. In the morning he awoke to see that instead of a beautiful woman, he had slept with an ugly old hag. Her Hogan, which appeared to him to be a lovely place the night before, was now filled with cobwebs and filth. He realized he had been enticed by a witch. When the man attempted to flee, he found himself trapped on top of a fortification known today as Standing Rock, located near the reservation community of Dalkon.

As that story is told, the man hid from the witch for several days. He became extremely hungry and thirsty. He knew he had to do something or perish. Two pigeons appeared and they took pity on him. They brought him corn mush and wild berries to eat and water to drink. Then the birds summoned the help of a dragon to help get the man down from his prison atop the rock.

The pigeons, who could talk, told the man that he must sleep that night to become rested because the dragon would come at dawn. When it arrived, the dragon would put his head against the east side of the rock. The man was not to fear, but step boldly out on the dragon's head.

The dragon came just as the birds said he would. The man stepped out on its head and the beast then lowered him safely to the ground.

Like the Monkey Head, Standing Rock was said to have risen out of the earth in an unexpected eruption of energy from somewhere below. If there is any truth to the Navajo stories, what was the strange force that made the rock formations thrust their way up out of the ground?

Nearby mountains, all ancient volcanoes, may offer clues. Geologists say the forces that made the mountains probably played some part in creating these odd mesas.

Another interesting feature of the area is the sprawling remains of an ancient forest. Pieces of trees, long ago turned to stone, lie in crumbling ruin almost everywhere you look in the Holbrook area. Chunks of petrified wood can be bought in curio shops throughout the area. A portion of this strange place has been set aside by the U. S. Government for preservation and is known as the Petrified Forest National Park. The existence of these stone trees adds to the mystery. It is obvious that dynamic climate and weather changes have been going on in this area for thousands, if not millions of years.

The area where a great forest once stood now is a barren desert.