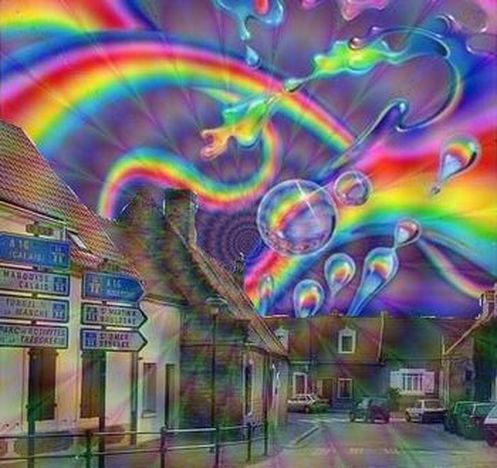 The Day They Went Crazy In Pont-Saint-Esprit

Pont-Saint-Esprit is a quiet community of some 9,000 people nestled along the Rhone River in Southern France. The town was about half that size on August 15, 1951 when a strange epidemic of wild insanity swept the place. It was said that people ran wild in the streets. More than 250 people were affected, 50 were committed to asylums and seven died before the strange affliction came to an end.

It began with citizens complaining of heartburn, stomach cramps and fever chills. Within two days extra police were brought in as the insanity began striking the victims. A Time Magazine story told how men ran through the streets shouting that someone was after them. A small boy reportedly attempted to strangle his mother. Patients suffering from delirium had to be lashed on their beds as they thrashed and screamed that red flowers were blossoming from their bodies and that their heads had turned to molten lead. The hospital reported four attempts at suicide.

Authorities soon learned that every one of the patients had eaten bread from the same local bakery. Local citizens suspected that someone had poisoned the flour, or that they had been poisoned by mercury from the fertilizers used in growing the grain.

To this day conspiracy theorists have suggested that the town was the victim of a mind control experiment by the CIA, which was known to have been testing LSD on American soldiers during that period.

The police, however, traced the flour to a mill near Poitiers, nearly 300 miles away. A study of the flour revealed that the culprit was ergot, a black mold that grows on wet grain that can have a powerful and sometimes deadly effect on the nervous system.
Author Hank P. Albarelli Jr., who researched the CIA Cold War experiments, wrote in Voltaire Network that he believed the case for an LSD experiment in Pont St. Esprit remained strong.

He wrote that the ergot diagnosis “was based almost solely upon the findings of biochemists dispatched to the scene from the nearby Sandoz Chemical Company in Basle, Switzerland. Included in the contingent from Sandoz was Dr. Albert Hofmann, the man who had first synthesized LSD on November 16, 1938.

“At the time of the Sandoz group’s visit to Pont St. Esprit only a handful of scientists worldwide, estimated to be no more than eight to  ten, knew of the existence of the man-made drug LSD. Of perhaps equal, if not greater, importance was that virtually nobody in France in 1951, apart from a select few officials at Sandoz Chemical, was aware that the company was secretly working closely with the CIA.”

In his book A Terrible Mistake, Albarelli claims the CIA was conducting top-secret, joint Army-CIA experiments with LSD in both the United States and Europe. The belief was that LSD could be placed either in the water supply or applied through aerial application to disorient and turn an entire army of enemy soldiers psychotic and thus unable to fight.

Albarelli also claims in his book that the Pont-Saint-Esprit experiment was conducted under the direction of Dr. Frank Olson, who was then serving at the Special Operations Division at Fort Detrick, Maryland.

It is known that the CIA did, indeed, secretly administer LSD to unsuspecting Americans in clandestine experiments on college students, drug addicts, veterans, soldiers, and mental patients.

While LSD (lysergic acid diethylamide) has been shown to be a drug that can be used safely when administered by professionals who understand how it works on the mind, it also has the potential of making people believe they have gone insane when they are caught unaware.

The late author Alduous Huxley once noted that LSD unlocks the “doors of perception” and thus can be psychically violent, throwing users into a state of fear.

Thus if the CIA did, indeed, experiment with LSD in Pont-Saint-Esprit in 1951, it was an experiment that went terribly wrong.