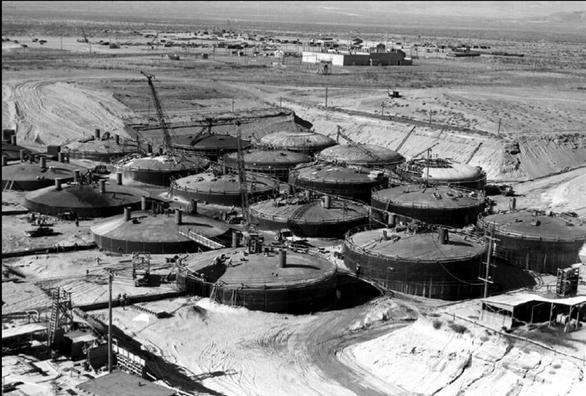 It was top secret research known as the Manhattan Project as American military scientists raced both Germany and Japan in the development of the world’s first atomic bomb. The stakes were high because everyone knew that a bomb this powerful was going to assure victory in a war that encompassed the world.

Of course the United States won the race. Allied forces discovered Germany’s secret project in Norway and bombed it out of picture. Japan also was studying uranium enrichment at Kyoto University but those researchers didn't have time to utilize what they were learning.

The success in capturing nuclear energy led to the construction of uranium powered power plants all over the world, plutonium powered space craft capable of searching the stars, plus naval ships that can stay at sea for indefinite amounts of time. Utilizing that kind of new energy appeared to be a major step into the future at the time it was first discovered.

But early atomic researchers did not fully understand the power they had at their hands and its potential dangers. The biggest problem has been the massive build-up of spent plutonium, a by-product of the reaction caused by plutonium in these facilities properly known as “reactors.” Scientists knew early on that there had to be a way to create a reaction in uranium to create plutonium, which is a deadly heavy metal. It takes plutonium to build a nuclear warhead.

We think of the Manhattan Project as something that occurred at the Los Alamos National Laboratory in New Mexico. But it was a very big project that employed over 130,000 people and the construction of factories in more than 30 places in the United States, the United Kingdom and Canada. One of the largest plants was the Hanford Engineer Works along the Columbia River in the State of Washington. It was there in the B Reactor that the plutonium used in the bombs dropped on Japan was made.

During the Cold War, eight more nuclear reactors were added to the Hanford Site. There were also five large plutonium processing complexes that produced weapons grade plutonium for over 60,000 weapons for the U.S. nuclear arsenal.
It was a massive and insane buildup.

Because we had it, the United States boasted of being the most powerful nation in the world. But we remained in a constant state of competition with Russia, which also was aggressively building a nuclear arsenal. This is what the “Cold War” was all about. Neither side wanted to "push the button" but we both wanted world dominance.

Now that nuclear bombs are possessed by various nations the situation has changed, but not necessarily for the better. The cold war is basically over but there is a fear that one of the nuclear powers might actually get involved in a war that will lead to a nuclear conflagration that will make our planet uninhabitable. Even if this never happens, it is possible that the genie has already escaped from the bottle.
​
The massive buildup of stored and spent plutonium is coming back to haunt us. We saw what happened at the Chernobyl and Fukushima facilities when they overheated and went into self-destruct. The ramifications of those two disasters are still being discovered. Entire parts of our world are estimated to remain uninhabitable for hundreds of years because of the extreme radiation that is being emitted and will continue polluting everything for hundreds of years. Nobody . . . not even robots . . . can get close enough to fix what has happened at these plants.

We have addressed the smoldering fire at a large landfill northwest of St. Louis, Missouri that is burning toward an estimated 8,700 tons of spent uranium and other nuclear waste that was carelessly dumped there from the Manhattan Project. Uranium can burn at 6,000 degrees Fahrenheit. It burns in water and without oxygen. Once it is afire it can burn for hundreds of years and the nuclear toxins will spread wherever the winds take them. It is a potential disaster worse than Fukushima, located right in the heart of the United States, and the government to date is not doing anything to put that fire out.

At least two of the nation’s oldest and largest nuclear power generating plants, at Turkey Point in Miami-Dade County, Florida, and Indian Point along New York’s Hudson River have both been leaking tritium-laced water into nearby waters and contaminating local ground water. Both plants have had problems in their 40-plus years of history but both plants are furnishing power to major populated areas so disastrous shut-downs of any kind would affect electric power to New York City and Miami areas.

How many other nuke plants are still operating past their time and consequently on the brink of becoming nuclear disasters?

By now you should have guessed it. The Hanford Site also has been found to be falling into ruin. One of the 28 underground tanks filled with 56 million gallons of radioactive liquid waste is leaking. The Department of Energy claims no threat at this time to public safety but one spokesman said the situation at Hanford is potentially “catastrophic.”

The Department knows the danger and has been attempting to get government appropriations for an estimated $120 billion cleanup. But everything has been stalled by the politics, the cost and the danger of the mere task that lies ahead. Like Fukushima, it may soon be too deadly for workers to get close enough to the site to fix the problem. The rows of giant tanks were never designed for storing plutonium waste for long periods of time. And the big question is . . . even if we could get to it safely, where will we put it?

With politicians in Washington balking at taking on such a spending project on the home front the Department of Energy can do no more than hope some way will be found soon to fix the messes created by past reckless experiments with nuclear energy.
​
Deep consideration should also be given to plans for building any more nuclear power plants, anywhere.