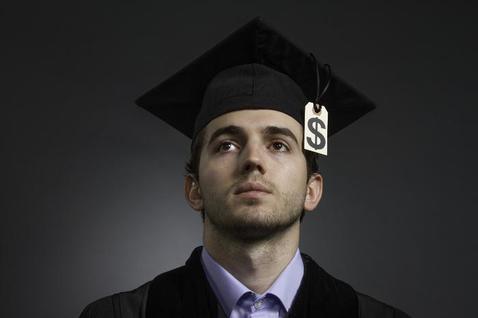 When I attended college in the late 1950's the sociologists jokingly called it a "four-year-extension of infancy." That was because any high school graduate with a high enough grade average or the capability of passing a college entrance exam could get a crack at a bachelor’s degree or more.

Tuition and the price of used text books at the campus store made the price of attending college within grasp. That was because we could earn enough money on available summer jobs to pay that part of the bill. I was able to earn enough while in college, working at one of the dormitory cafeterias, to pay my off-campus room rent of seven dollars a week. A weekly $10 check from my parents covered my food bill.

Sure, we ate a lot of pasta and oat meal, and the cooks at the food commons sometimes slipped us a free hamburger when the boss wasn’t around. It took a lot of resourcefulness, but we got by, and we got an education.

An education in those days was more than training for a specific vocation. I signed up for classes in a variety of fields, mainly because I had no idea at first just what I wanted to do with my life. I think the real education involved the deep philosophical conversations we had in the evening, often sitting around a campfire along a local river and sipping a can of beer. That’s where I met the real thinkers among the student body; the guys who challenged the rest of us to go where no student had gone before.

Because I bounced around from one subject to another, earning credit hours in biology, mathematics, English, history, sociology and journalism, and slipping in classes in art and printing, it took me five years to get that four-year degree. But when I graduated I had an education. I believe I was among the last students to graduate from my college with a liberal arts degree. They were already specializing in those days but they slipped me into that category because I lacked the required hours in certain fields to received a specialized degree.

Students today can’t get a college education the way I did it. The problem has been a decline in state funding to colleges and universities, thus forcing schools to increase tuition costs to cover an ever rising cost of just operating the schools. And the minimum hourly wage, received in summer employment, has remained unchanged while the cost of everything around us has gone through the roof. Thus the summer jobs don’t pay enough to cover the cost of tuition and books.

Also the cost of on or off-campus living is so high that students can’t earn enough at any part-time job in a college community to cover it. The price of everything associated with going to college is so high that students from moderate income families are forced to secure heavy student loans, backed by the government, to cover all of those costs. And very few college graduates secure good paying jobs once they leave campus.

With debts ranging from $30,000 to $60,000 and higher, with accumulating interest, and the cost of just having a family and earning a basic living eating up every cent they can earn, those student loan debts become an albatross around their necks.

That is because there is a catch linked to the student loans. They can’t go bankrupt and write off those debts. The bankruptcy laws prohibit it. While the debt remains unpaid, or if the student gets behind in making regular monthly payments, it puts a black mark on the student’s credit rating. This affects the graduate's ability to rent or buy a home, buy a car, or even possess and use a credit card. And even worse, there is accumulating interest on the balance owed on those loans, which makes the debt grow sometimes faster than the borrower can pay down on the principle.

The horror in this story is that some students struggle for the rest of their lives attempting to get out from under the student loan debt they acquired just to go to college.

Recent statistics revealed that 71 percent of living college graduates in the United States are carrying student loan debt, with an average amount owed at $33,000 each. The total amount due in outstanding student loans is calculated at $1.2 trillion.

Consequently our best and brightest people, our college graduates, are so burdened with debt that they are delaying buying homes, cars, and even holding back on starting families. Potential doctors, lawyers and other professional people are so saddled with debt from their first four years they are not willing to borrow more money to finish their training. And those that do finish are forced to charge their clients high fees just to help pay off those bank loans.

To make the situation even worse, legislators in the states of Iowa and Montana have hardheartedly passed laws allowing the state Department of Motor Vehicles to revoke the driver’s licenses of anyone failing to pay their student loan debt. This involves anyone just getting behind on a payment. The laws contain a self-perpetuating problem for the debtor, since people must have cars in order to get a job to earn money to make payments.

It doesn’t take a rocket scientist to see that there is something very wrong with America’s education system.

Some legislators have introduced bills designed to somewhat ease this terrible burden on student graduates but to date we haven’t seen any of them win congressional approval or reach the President’s desk. The crisis is so severe, we are not sure just "easing" the burden is going to be enough. Something needs to be done to erase the accumulating interest rates, or perhaps to excuse the student debts altogether.
​
The United States is one of the few countries where students suffer from this problem. Other nations literally finance the cost of educating their brightest and best students. The results of this emphasis on higher education are being felt. Research labs, medical professionals and physicists in Europe, Japan and even China are excelling, pushing far ahead of anything going on in the United States in their fields.