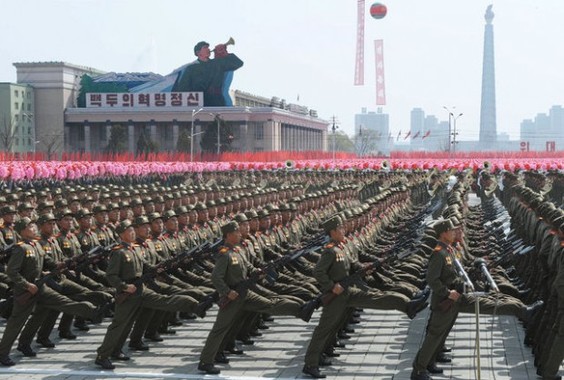 Trump May Be Blundering The World Into War

So Mr. Trump is now playing war games with the world. Last night two U.S. Navy warships, the USS Porter and USS Ross fired 59 tomahawk cruise missiles into the Syrian airbase at Shayrat; a base believed to be the origin of the chemical assault on rebel territory in that country’s bloody civil war. The outcome of that attack is still to be learned.

Because of his bungling, and because he is turning over the affairs of U.S. foreign policy over to unqualified people including his son-in-law, Jared Kushner, the United States has been taking steps that could easily generate all-out warfare with North Korea, Syria and stir fierce terrorist attacks from throughout the Middle East.

In the few weeks that he has taken over the reins of our government, Mr. Trump’s Secretary of State Rex Tillerson has also warned that military action against North Korea will be “on the table” if North Korea elevates threats of firing nuclear missiles at either South Korea where U.S. troops are stationed, or at Mainland United States.

And after receiving news of the deadly chemical attack against the Syrian people Vice President Mike Pence used the same threatening phrases, saying that U.S. “options are on the table” as to how this nation will respond. Pence and Trump both blamed the Obama Administration for not taking action to assure the world that Syria and Russia kept a promise to destroy a stockpile of chemical weapons in Syria.

Indeed, the Syrian conflict has been a complex situation involving various Islamic military forces, The Russian, Syrian, Iranian and Turkish forces all bombing and ravaging that war-torn nation in what has been referred to as a five-year old civil war. Will Mr. Trump dare to escalate the fighting there in the interest of a world power-play, simply because he believes he commands the most powerful army in the world?

The North Korean issue may be even more dangerous than the Syrian conflict. The American media has painted North Korean President Kim Jung Il as an incompetent fool. In doing so, they have made it appear, at least to the U.S. citizenry that there is nothing to fear from that part of the world. But Kim Jung Il is not a fool. And he has been trying to follow U.S. protocol for a peaceful settlement ever since President Bill Clinton established his “Framework Agreement” in 1994. Under terms of this agreement North Korea would stop its efforts to develop nuclear weapons and the United States would reduce its hostile acts in the area.

Well known social critic and historian Noam Chomsky revealed the full history of U.S. North Korean relations since that date in an interview this week with noted columnist Amy Goodman. He said that when George W. Bush took office in 2000, even though North Korea was living up to the terms of its agreement, Bush launched an immediate assault. He called North Korea the “axis of evil and established sanctions on this already poverty stricken nation. And the North Koreans then began developing nuclear weaponry again.

Chomsky said that by 2005 a new agreement was reached. He said it was “a pretty sensible agreement. North Korea agreed to terminate its development of nuclear weapons. In return, it called for a nonaggression pact.” The leadership asked for the U.S. to stop making hostile threats, relieve the country from harsh sanctions, and provide a way for North Korea to acquire low-enriched uranium for medical and other purposes. “That was the proposal,” Chomsky said. “George Bush instantly tore it to shreds.”

He said Obama also dismissed the proposal, so North Korea has gone ahead with its nuclear weapons development. Now that it has the bomb, it is actively working to build a missile powerful enough to carry such a bomb across the Pacific Ocean to the western coast of the United States.
The big question now is how Trump will deal with North Korea. Tillman’s threat that a military option against North Korea is now “on the table” has serious ramifications. Chomsky said he believes steps can still be taken to alleviate what could quickly escalate to a serious crisis. The problem is that it will be up to a gang of unprepared and non-understanding nincompoops to off such a crisis and they may lack the skills to do it.

There are presently 28,500 U.S. troops stationed in South Korea. That nation has developed to become a major electronics center and provider of goods and services to the United States. North and South Korea are divided by a heavily fortified and guarded border. Chomsky noted that if the U.S. ever decides to use force against North Korea, it is very possible that the North Koreans will turn its military forces against Seoul, the Capital city of South Korea, and the U.S. military base established there.
​
“And who knows where we’d go from there?” Chomsky asked.