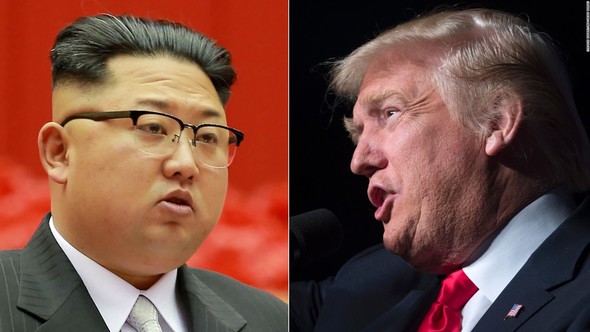 With just over two months into his presidency, Donald Trump is already portraying himself as a world bully willing to turn his mighty military force on any world power daring to defy him.

The firing of 59 Tomahawk Missiles into a Syrian air base following a chemical attack on Syrian enemy forces and civilians; the dropping of one of the largest non-nuclear bombs in the military arsenal on Afghanistan rebels and the visible threat of a naval attack looming on North Korea because of that nation’s refusal to quit development of its own nuclear weapons are all ongoing events that have world leaders nervously watching Mr. Trump's next moves.

The danger in all of this is that at least three of those concerned leaders, Russian President Vladimir Putin, China’s President XI Jinping, and North Korean President Kim Jong Un are all on apparent war alert and armed with a nuclear armament of their own. Because we have some awareness of the sensible nature of both Putin and Jinping we are hopeful that these men may use common sense in dealing with the unpredictable Mr. Trump. But the problem the world faces is that North Korea’s president appears to have as unpredictable a personality as Trump. With both of these men staring down their gun barrels at each other, and with their hands on the nuclear trigger, the game Mr. Trump appears to be playing could turn deadly.

So this is our situation as these words are being written. Trump has diverted the USS Carl Vinson aircraft carrier group toward Korea in a show of force that is supposed to deter North Korea from conducting another nuclear test or launching more missiles. Un has declared that he will attack the United States if even one bullet it fired against his country. China has troops now stationed at the Korean border on standby if needed for evacuating citizens or backing up the North Korean military. The United States has about 2,500 service men and women stationed in South Korea at the border of North Korea.

If he attacks, it is obvious that Un’s first missiles will be aimed at our military base in South Korea. It is not known if his missiles are capable of reaching the U.S. mainland. They will reach nearby Japan, a U.S. ally, however. Consequently Japan also is believed to be participating in this naval maneuver off the Korean coast.

The ships are expected to reach their destination sometime in the next few days.

As the tension grows, China has stepped up in an attempt to resolve this deadly standoff before Trump and Un take it too far. Chinese Foreign Minister Wang Yi warned the military force must not be used. “Amid challenge there is opportunity,” he said. “Amid tensions we will also find a kind of opportunity to return to talks. Whoever provokes the situation, whoever continues to make trouble in this place, they will have to assume historical responsibility,” Wang warned.

At issue is a declared plan by North Korea that it will soon conduct its sixth nuclear test and more missile launches in defiance of U.N. sanctions and warnings from the United States that a policy of patience is over.

China, which has always stood as North Korea’s main ally, also opposes the nuclear tests. In an effort to resolve this issue China is calling for talks to reach a peaceful resolution and possible denuclearization of the Koreas.

A state-backed Chinese newspaper stated in an editorial this week that the best option for North Korea and Kim Jong Un will be to give up that country’s nuclear program. If it does this, China will agree to protect North Korea. Once North Korea suspends nuclear activities “China will actively work to protect the security of a denuclearized North Korean nation and regime,” the editorial stated.

These are the facts as Trump and Un stare down each other this week. The question will be . . . does someone blink or will the world be at war?