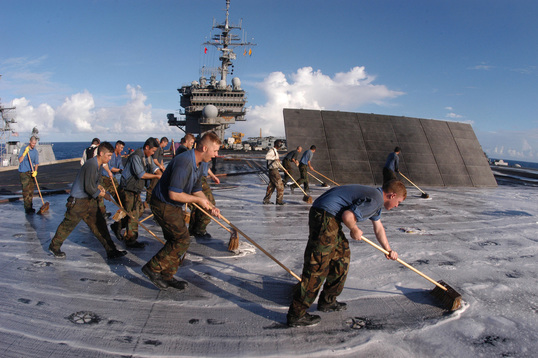 It’s a horror story that hasn’t been making headlines in the United States for troublesome political reasons. At last count an estimated 400 U.S. Navy sailors are either dead, dying or being treated for nuclear poisoning after the ships they served on took them into a deadly radiation cloud at Fukushima in 2011.

The numbers are growing as time passes. Radiation sickness takes time to run its course.
At last count over 100 of those families affected by the disaster have filed a class action lawsuit against Tokyo Electric Power Company (TEPCO) and the numbers continue to climb. An estimated 77,000 U.S. sailors and marines participated in a two-month-long relief effort called Operation Tomodaci after three TEPCO nuclear plants were destroyed by a magnitude-9.0 earthquake and subsequent tsunami.

The naval officers on those ships were told radiation levels were safe when they were ordered to bring their ships to the scene to offer assistance. But the people who operated the TEPCO plants either were lying or they were ignorant of the silent death trap those sailors were sent into. The public was not told until much later that at least two if not all three of the plants had gone into a total meltdown. They are still pouring an untold amount of radiated isotopes into the environment and there appears to be no way of stopping this ongoing disaster.

The US Navy sailors and marines were slammed by invisible radiation in the air and in the water they drank, which was desalinated. But the desalination process was never designed to remove radioactive isotopes from water.

While the navy maintains that U.S. sailors serving on those ships received only small, non-harmful doses of radiation, the number of men and women now dropping from leukemia, thyroid and other cancers and physical disorders has shown that the exposure was extensive.

A separate lawsuit brought by the family of Theodor Holcomb, who served on the USS Reagan aircraft carrier and died of cancer in April, seeks $1 billion for a medical monitoring and treatment fund.

The navy has spent an untold amount of money attempting to clean up those contaminated ships. The Military Sealift Command reports that 13 of those ships still have signs of contamination, mostly in the ventilation systems, main engines and generators.
Many of the radiated sailors served aboard the mighty aircraft carrier USS Reagan, which anchored just off the coast of Japan and was heavily involved in assisting the stricken Japanese people. The names of the 24 other ships involved in Operation Tomodaci have been carefully withheld from the few news reports we have found.

Former Prime Minister Junichiro Koizume, in a tearful May news conference in California, called upon the U.S. government not to ignore the suffering of the men and women who served on those ships. “Those who gave their all to assist Japan are now suffering from serious illness. I learned that the number of sick people is still increasing and their symptoms are worsening,” Koizume said.
​
Indeed, this situation is grim and it is time our nation supported those sailors who were tossed into a deadly and invisible radioactive cloud, forced to remain there for weeks, and are now paying the price through no fault of their own.