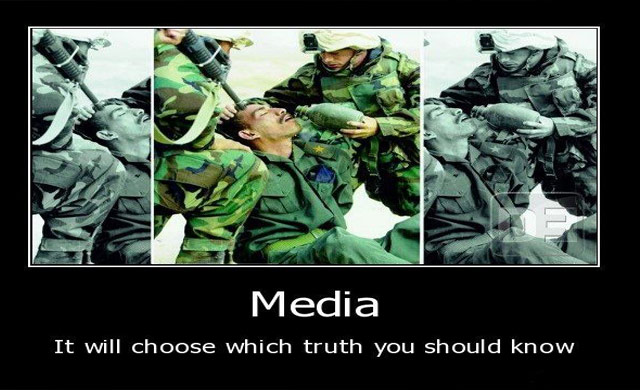 The Brainwashing Of The Masses

Author and video producer Steven Jacobson wrote: "Television is the most powerful weapon of psychological warfare in history. The programming that we are constantly assaulted by throughout our lives conditions us. It programs us to a particular worldview. Now, we may consider it normal because we were born into this system of lies and deception. And because we were born into this situation and our parents were born into it and have suffered from it, we don’t know any better."

Jacobson is author of the book Mind Control In the United States. In it he declares: "All the problems in America are the result of people being led to believe things that are not true."

Unfortunately, Jacobson appears to be correct in his claims. While not all television programming is found to be filled with malicious misinformation, most of the news content is either slanted in favor of an ideology, or certain important information is conveniently omitted. Certain high profile stories may dominate the news while crucial information we should be told about is either avoided or given casual attention.

During my college years I took a journalism class that addressed the problem of biased reporting, how to recognize it, and how to write balanced news stories that allowed the reader to decide what to believe. We were taught that every controversial issue has two sides. A man accused of wrongdoing may be either guilty or innocent. The politician seeking public office may have ideas that a majority of voters like or dislike. A nation’s decision to go to war may be justified, or not. It is the job of the media to carefully present all of the available information and always remain on neutral ground while doing so.

That class, and the excellent number of great newspaper editors I worked under during my younger years, helped cement an understanding of fair and balanced reporting. That phrase, "fair and balanced" has been misused by Fox News, perhaps the most slanted of the so-called television information outlets to win the trust of the brainwashed masses. Little about the information and opinions flowing from the lips of the talking heads on that network is either fair or balanced.

As part of our studies for that journalism class, we were required to read a book by Vance Packard titled "The Hidden Persuaders." Even then, when this book was published in 1957, there were subtle forms of propaganda being used to trick us into buying certain products or believing certain political ideals. While television was still in its infancy at that time, the trickery was all around us. They even went so far as to weave sensual images in what appeared to be wholesome promotional pictures and drawings. Remember the Camel cigarette’s mascot Joe Camel? He was a cartoon image of the male genitals with a face.

Walter Glenn Moore, in a commentary The Battle For Your Mind, wrote: The most dangerous form of mind control is subtle and it is coming from the technology which has been freely given to us on a silver platter – television, movies, internet and music. Drugs, sports, amusement parks and entertainment could also be viewed as subtle mind altering experiments which tend to change our mental focus from reality to fantasy, producing a trance-like state of life which is similar to that of one who has been hypnotized."

Moore wonders why they call television entertainment "programming." He believes it is designed to do exactly that . . . program our society to behave, dress, and respond in the way certain power figures choose.

The current political battle between Democrat Hillary Clinton and Republican Donald Trump for the next four-year term as president of the nation has exposed the very worst in twisted thinking that has found its way into a highly financed propaganda machine.

Because of the Supreme Court’s Citizen’s United decision declaring corporations qualified to finance campaigns, the candidates for all of the high offices have found themselves flooded with billions of dollars for an advertising blitz unlike anything the nation has ever experienced. The lies, half-truths and hate messages now dominate our television screens, our radio programs and printed publications. It floods our computer screens. Small wonder that the public is confused, angry and ready to strike when they get an opportunity to go to the polls. But how can a vote cast in either direction repair the situation they are in?

Writer David Icke declared: "Most of humanity is in an absolute hypnotic trance that they’re put in from cradle to grave by constant repetition of a fake reality." Icke then adds a strange line: "And when we wake up from this we will not be subservient."

When he wrote those words Icke was obviously referring to the promise of a global awakening that appears to now be happening. There is a clear sign, especially among the youth, that the massive propaganda machine is no longer keeping all of the slaves in check.

Before he left the newsroom, CNN’s Jack Cafferty used to put out a question for television watchers every weekday afternoon that portrayed an interesting cross-section of the way Americans were thinking. Viewers had nearly an hour to e-mail or twitter answers to a political question. Cafferty would select four or five of them to read at the end of the hour. While the host attempts to present balanced commentary from both sides of the issue, a visit to Cafferty’s website allowed us to read all of the answers. It was promising to note that a majority of respondents appeared to be awake and fully aware of the twisted rhetoric being pumped into their heads.

That people have been taking to the streets all over the world in protest to the oppressive governments they have been forced to live under is another important sign that change is in the air. The Arab Spring, the Occupy Movement, the Libyan and Syrian revolutions were among the early ones that made headlines. People are now picketing in France and even China. We suspect many other protests are occurring but we are not being told about them. While driving the roads in our part of the nation we often come upon people in the street brandishing protest signs.

It has been said that the best way to tear ourselves away from the brainwashing effects of the mass propaganda machine is to first be aware of it, and then be selective in the television, film, radio and music programming we choose for personal entertainment. There are some excellent programs, documentaries and videos that can be streamed into home television sets via the Internet that allow us to skip all of the political junk that now floods the airways.

Our advice is to select what you watch with care and always keep an open mind. Never pass personal judgment until you have all of the facts. And don't trust the media as a truthful source of information.