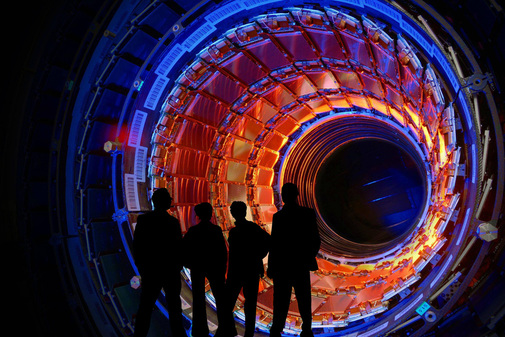 Will The “God Particle” Wipe Us All Out?

About two years ago when the quantum physics researchers at the European Center for Nuclear Research (CERN) in Switzerland were smashing protons at nearly the speed of light on a giant hadron collider, some scientists worried that they may start a chain reaction that would destroy our world and the universe around it.
​
The research team claimed it was attempting to simulate a miniature “big bang” to get an understanding of just how the creation of our universe came about. They were also looking for an elusive “God Particle” called the Higgs Boson that they believed existed as a kind of glue that caused atomic particles to collect and form mass.

Other experiments were planned to help scientist understand such mysteries as the nature of dark matter, black holes, and whether other dimensions exist.

While Stephen Hawking was sounding warnings of the potential dangers linked to such experiments, two other scientists, Walter Wagner and Luis Sancho filed suit in U.S. District Court, Hawaii, in an attempt to stop the testing. They said they worried that when the machine started smashing protons it might produce a black hole that would consume the earth and perhaps the solar system. They also argued that the machine might produce a “strangelet,” or the conversion of Earth into a dense, dead ball of “strange matter” or create massive particles that start a runaway reaction converting atoms into other forms of matter.

German chemist Otto Rossler, of Eberhard Karls University, participated in another court cast seeking an injunction from the European Court of Human Rights. Rossler said he calculated that the machine could create miniature black holes that could be a threat to the planet. He said he calculated that if such a black hole was created, it would grow exponentially and eat the planet from the inside. Rossler estimated that the process would take about four years before it became large enough to do its destructive damage.

The collider has been operating for about two years at the time of this writing.
The court cases did not stop the CERN project and the research team has been busy smashing atomic particles in their massive underground machine ever since. While it is all too technical for most of us to understand, the CERN scientists say a lot of important scientific knowledge has been gained. And yes, they found the Higgs Boson.

Hawking has not changed his thinking about the possibility of a Higgs boson doomsday. He is joined in that concern by Joseph Lykken, a theoretical physicist at the Fermi National Accelerator Laboratory in Batavia, Illinois.
​
They perceive the Higgs Boson particle as existing in a “Higgs field,” or an invisible energy field present throughout the universe that brings other particles together in mass. But they also believe the Higgs field exists at the edge of instability that might collapse at any time. Thus they have projected a theory of a Higgs boson doomsday where a quantum fluctuation creates a vacuum “bubble” that expands through space in a flash and  wipes out everything.

They have dubbed such an event as "catastrophic vacuum decay," which means very little to anyone who is not deeply involved in playing around with quantum physics. How and why it might happen is difficult to understand. But if it does, there is no need for us to worry.

Lykken says it will all happen so quickly we will never know what hit us. We will be here one moment, and everything will be gone the next. Or will it?

Theoretical physicist Gian Giudice, who works at the CERN lab, notes that the experiments also are looking into the theory of parallel universes. What this means is that there may be multiple copies of the world, the neighborhood and the universe that we are now living in.

The Higgs field, Giudice said, is "a substance that fills all space-time, and could exist in two states; like matter can exist as liquid or solid."

Does this mean that we personally may exist in a parallel universe. If the bubble pops in this universe, does it mean that we suddenly continue on in another dimension? Would we even notice?