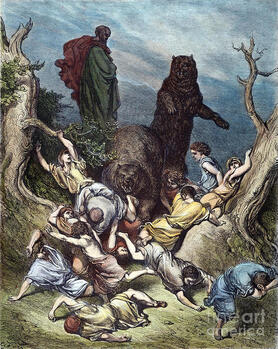 From the Book of 2 Kings in the Old Testament, we know that Elisha was a Hebrew prophet and miracle worker who served as a disciple of Elijah. After Elijah was taken up in a “whirlwind”, Elisha was accepted as the new leader of the sons of the prophets of that time.

In 2 Kings 2:11-12 we read: “As they were walking along and talking together, suddenly a chariot of fire and horses of fire appeared and separated the two of them, and Elijah went up to heaven in a whirlwind (UFO?). Elisha saw this and cried out, “My father! My father! The chariots and horsemen of Israel!" And Elisha saw him no more. Then he took hold of his own clothes and tore them apart."

The passage makes it clear that Elisha considered Elijah his father, at least in a spiritual sense, and the tearing of his clothes implied that he was mourning the death of his teacher and leader. Another custom at that time was that when mourning, men shaved their heads. Which helps explain what happened next.

In 2 Kings 2:23-24 we read that Elisha went up from Jerico unto Bethel: "and as he was going up by the way, there came forth little children out of the city, and mocked him, and said unto him, Go up, thou bald head; go up, thou bald head. And he turned back, and looked on them, and cursed them in the name of the Lord. And there came forth two she bears out of the wood, and tare forty and two children of them."

So why would children, mocking Elisha's bald head, stir such wrath that he would use his magical powers to curse them, and bring forth two bears to slaughter 42  of them?

In the research for this article, and while giving this story a great deal of thought, I came to the following conclusions.

That the bears ravaged 42 children out of a crowd of that mocked Elisha means there was a relatively large crowd of children involved in this incident. We do not know the age of the children. But if they were teenagers, a large gang of them would at least appear to be very threatening to a lone traveler on the road.

That there was a gang of mocking children on the road that day meant that the youths were out of the control of the typical Jewish home. And that alone was an unusual situation. Proper Jewish homes maintain strict control of the children.

Elisha was a prophet and a miracle worker. That means he was a powerful sorcerer and capable of passing judgement on those around him. The children had no idea who they were attacking when they went after the lone, bald headed man in torn clothing walking alone on the road to Bethel. They mistakingly saw him as "fair game."

Notice that Elisha did not raise a finger to hurt the children. Rather, he called upon the powers of the Earth to take care of the situation and pass judgment, whatever it was to be. Thus two female bears, possibly out to protect newborn cubs still sheltered in the woods, charged into the gang of young people. The bears brought down 42 members of that threatening gang before the bloodbath was over.

It wasn't because they were mocking Elisha's appearance that the bears did their destructive work that day. It was because these young people were disobeying the natural social order and were collected in a threatening gang, that judgment came upon them swiftly. That they chose to target a powerful sorcerer was a very big mistake.

The story can apply to our contemporary lives. We need to treat all people with respect, no matter what their appearance. We never know if the begger at our door is perhaps an angel in disguise.