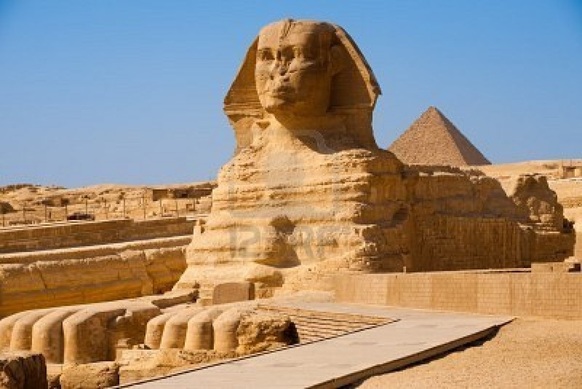 So Who Built The Sphinx And Why?

The Great Sphinx of Giza is among the largest, and believed to be the oldest single-stone statues on the planet. Because it is within close proximity to the Great Pyramids of Giza, historians have long believed the Sphinx was built at about the same time, about 4,500 years ago, and is Egyptian art. But contemporary research gives evidence that it may be much older than even the pyramids.

Author Robert Bauval, in his book The Age of the Sphinx, notes that there are no inscriptions carved on a wall, or a reference to the Sphinx carved on a stela or written on surviving throngs of papyri from that Egyptian period. This suggests that its construction was not part of the historical record of the Egyptian people.

And archaeologist John Anthony West has recorded water erosion and other heavy weathering on the base of the Phoenix, which he believes could only have been caused by long exposure to water. But the Sphinx stands in the midst of the desert. How could this have happened? Geologists who study such things say the area experienced heavy rains and flooding about 10,500 years ago, which suggests that the Sphinx may be much older than anybody ever imagined. It may have long predated the Egyptian civilization.

The artwork carved into the 241-foot-long and 65-feet high statue appears Egyptian. Many Egyptian historians believe it was built at the time of Pharaoh Chephren, who was said to have ordered the production of several large statues in the kingdom. Of all of the works carved from solid rock, however, none of them rival that of the size or mystery of the Sphynx.

The massive creature gazes with large and almost scary eyes eastward toward the equinox. While the face is intact, the nose is missing. A large gash across the face appears to have been caused by an explosive device, possibly a shell that removed the nose. Was that an accidental strike, or was it done on purpose?

Louis Farrakhan once said he believed the damage had racial undertones, and that the nose was blown away by whites who were angry that the nose of the Sphinx was Negroid.

Napoleon has been blamed, as have British and German forces during the great wars, although there is no record of this being true. Historical record notes that both Arab conquerors and Sa'im al-dahr damaged the Sphinx. Writings of Sa'im al-dahr specifically mention the nose.

Yet another mystery surrounding the Sphinx has been the story that a secret chamber, or chambers, exist under this mighty rock. There are two sources of this story. One dates back to Pliny, who wrote in his ancient book Natural History, suggested that the Egyptians buried King Harmais inside the monument. While openings have been found in the rock no evidence that a burial site has ever been discovered.

A more contemporary story came from the late Edgar Cayce, who declared that a Hall of Records of the lost people of Atlantis exists under the Sphinx, with an entrance to be found between the paws.

Cayce made his proclamation in 1933, touching off a wide range of speculations and new theories among "Egyptologists," but it was not until about 1973 that extensive research, with ground-penetrating radar and other high-tech remote sensing equipment was used to locate possible "anomalies" under the bedrock below the Sphinx. The research included resistivity measures, magnetometer and thermal infrared image-enhancing photography. Certain cavities suggesting chambers and tunnels were located.

That the Sphinx depicts a human face on the body of a large cat, probably that of a lion, suggests that it was carved as the image of an ancient deity. Identification markings either were never placed in the rock, or they have eroded away over the centuries. Because of this and the severe damage to the face makes it almost impossible to do more than guess at the origins.

The concept of the Sphinx can be found in not only ancient Egyptian but Greek and Assyrian mythologies.

To the Egyptians, the lion with a head of a Pharaoh offered the role of a leader with wisdom and strength for the protection of the tribe. The Greek myth depicted the Sphinx as a woman-headed demon of bad luck and destruction, wearing eagle's wings and sometimes the tail of a serpent. The Assyrian Sphinx also was given various animal parts; the head of a man, a lion's forequarters, the hindquarters of a bull and the wings of an eagle.

That the Sphinx as it exists today along the Nile River may be much older than the Egyptian civilization, suggests that the Egyptian concept of a half-man and half lion may have been influenced by the art, if it was not the source.

Actually the Egyptians worshipped various deities that took the form of humans and cats. The earliest and most familiar of them was Bast, the protector goddess of Lower Egypt who defended the pharaoh and the sun-god Ra. Also there was the lion god Maahes, said to have been the son of Bast.