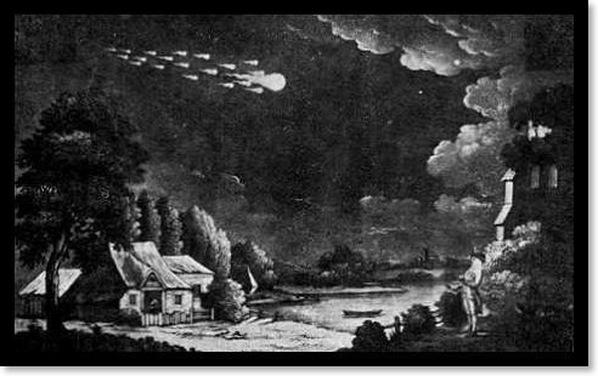 Most Terrible Events Of 1783

American history records that the Revolutionary War for independence from British rule came to an end during the year 1783 and the Treaty of Paris between the United States and Great Britain was signed in September.

Also that year, Frenchmen Marquis D’Alandes and M. de Rozier made the first successful flight in a hot-air balloon. They burned straw to heat 60,000 cubic feet of air in the 70-foot-high balloon and it carried them 3,000 feet into the sky. The event was especially notable because they became the first men to fly.

That was the good news that year.

Little is remembered about the natural horrors being experienced throughout Europe and as far East as Japan that same year.

Guardian writer Mark Pilkington noted that “it was a turbulent year for planet Earth. In February, cataclysmic earthquakes and volcanic eruptions killed 30,000 in Calabria, Italy, while Japan’s Asama-yama volcano disgorged enormous quantities of fire and brimstone between May and August, killing about 1,200 people.”

The worst event of all was the eruption of Iceland’s Skaptar Jokull on June 10, an explosion that spewed clouds and ash for months, asphyxiating 9,500 citizens and herds of cattle in Iceland and sending a colossal dust cloud over Europe that disrupted weather patterns for the summer and launching a famine that continued for a year to follow.

Pilkington described what was going on in England during that period. He wrote: “For about a month between June 23 and July 20, English skies were thick with a peculiar haze or smoky fox while terrible lightning storms left people cowering in their homes. One storm provided five men with a stay of execution at Tybum as the gallows, and assembled crowd, were flooded.”

Historian Gilbert White wrote: “The sun, at noon, looked as blank as a clouded moon, and shed a rust-colored ferruginous light on the ground, and floors of rooms, but was particularly lurid and blood-colored at rising and setting.”

Pilkington said the winds seemed to change direction with alarming frequency and the country was engulfed in a heat that was so stifling that “meat was said to rot within a day and the air was filled with clouds of flies.”

He said people feared that it was the end of the world and an “apocalyptic fervor climaxed on August 18 when a huge meteorite was witnessed in the sky from Sheffield to Canterbury.” The object exploded in a spectacular brilliance over the English Channel.

In Iceland, the eruption created a lava flow so large that it turned the Skapta river to steam and filled a nearby lake. Later eruptions created lava flows 50 miles long and ten miles wide. One fifth of the population of Iceland died under the noxious cloud.

That cloud was so large it eventually covered all of Europe from Scotland south to North Africa. The gasses from the eruption were said to have cooled the entire Northern Hemisphere by about a full degree Celsius, and effected crops. The resulting famine brought the death of an estimated 20 percent of the population in the following years.

Earlier in the year, on Feb. 5, the Island of Calabria, Italy, was struck with a deadly earthquake that left 30,000 people dead. It was said the sky was filled with a “black intense fog” with a “most disagreeable odor” that morning. People saw this as a bad omen. The quake struck at about 12:30 p.m. lasting about two minutes.

Then on May 5, the Asama-yama volcano, 90 miles from Tokyo, began its summer of eruptions. The mountain rumbled and smoked and earthquakes intensified until Aug. 4 when it send a tide of lava and hot mud that cascaded from the crater. The mountain virtually exploded the following day. The blast was heard from 300 kilometers away. A giant ash cloud filled with lightning went upward as dust, rock and lava swept down the slope, incinerating four villages.

The debris forced the Azuma-gawa River to break through a dam, flooding over 1,200 homes and killing 1,162 people over a 50-mile swath.