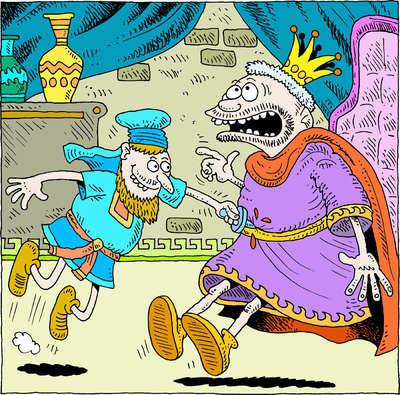 The Slaying Of King Eglon

Anyone concerned about contemporary literature and films that portray gory scenes should know that such scenes also are described in graphic detail in the Holy Bible. Not only did that include the crucifixion of Jesus, but we find it in various stories told in the Old Testament.

An example of this is found in the Book of Judges, Chapter 3, when Ehud, a “savior” of the Israelites, ended an 18-year period of enslavement by the Moabites by slaying King Eglon in ancient Mesopotamia.

When you think about it, it took a lot of intelligence, courage and daring on the part of Ehud to work his way before the king, arrange the privilege of private counsel with Eglon, then murder the monarch by jabbing him in the belly with a sword, and getting away with it. So perhaps, just because it left the Moabites without their leader and in a brief state of confusion, and because this allowed the Israelites a chance to mount an attack and break free, it was a story worth telling.

But why so graphically?

This is the way the story appears in Judges 3:21-25: "And Ehud put forth his left hand, and took the dagger from his right thigh, and thrust it into his belly with such force that the haft went in after the blade into the wound, and was closed up with the abundance of fat. So that he did not draw out the dagger, but left it in his body as he had struck it in. And forthwith by the secret parts of nature the excrements of the belly came out."

"But Ehud carefully shutting the doors of the parlour and locking them went out by a postern door. And the king's servants going in, saw the doors of the parlour shut, and they said: 'Perhaps he is easing nature in his summer parlour. And waiting a long time till they were ashamed, and seeing that no man opened the door, they took a key: and opening, they found their lord lying dead on the ground."

There are some interesting aspects to this story that are worthy of notice. Firstly, Ehud was left handed so he was able to conceal his sword on his right thigh, which was not the normal way men carried their arms in that period. Most soldiers are and always have been right handed and the sword is consequently carried on the left, so it can quickly be drawn by reaching across the belly for it.

Carrying his murder weapon on his right side, however, created a technical problem for Ehud. This is because swords or daggers of that day were sharpened only one one side, and they were slightly curved somewhat like a farm sickle. This kind of weapon would not have worked well for left handed Ehud.

He planned his attack carefully. Rather than attempt to use a standard sword of the period, Ehud made a straight, shorter weapon, somewhat like a dagger, and carefully sharpened it on both sides. Straight swords were only beginning to make their appearance at that time but they were being used by militant fighters along the coast. Thus Ehud either had heard about the straight sword, or he cleverly invented his weapon for the job he was about to do.

While he was searched by the King's guards when he entered the court bearing gifts, Ehud's concealed dagger on the wrong side of his body was not discovered. That was perhaps one of the most dangerous moments he faced while carrying out his deadly deed.
Notice that he met the king in a parlour, or small room, where the servants later assumed King Eglon had gone to have a bowl movement. Ehud enticed the king to step into that room by telling him he had a private message.

Once the king was in the room, Ehud pulled his dagger and stabbed the king right in the gut. The Bible story notes that the king was very fat and that Ehud thrust the dagger so deep it went past the hilt, so most of the weapon was buried in the king's massive mound of fat. Thus he just left the weapon in the dying king, closed and locked the parlour doors, and snuck out a back door without being seen. The get-away was the final point of great danger, and Ehud pulled it off.

There is gruesome humor in the part of the story where the servants approached the parlour, found the doors shut, smelled the stench of the internal material coming out of the fat king's belly, and assumed he was simply taking a dump. They waited patiently before discovering their error, thus giving Ehud time to flee.

There are lots of daring murder plots used in television and movie scripts, but we doubt if the killing of King Eglon will ever be among them.