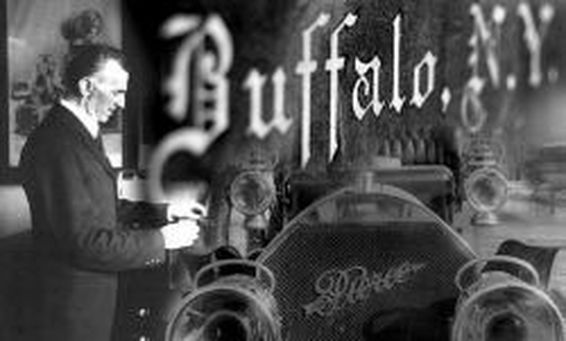 There is a story that the genius inventor Nicola Tesla once tested a mystery motor in a 1930 vintage Pierce Arrow automobile that ran without any sign of energy source other than an antenna and two strange metal bars that projected out of an “energy receiver” mounted under the dashboard.

As the story goes, the gasoline engine was replaced with a round, completely enclosed electric motor about a meter in length and 65 centimeters in diameter. The motor ran hot so it required a cooling fan in front of it. They said there was no distributor. The rest of the car’s drive train, from the clutch to the rear wheels, remained intact.

A box identified as an “energy receiver” or gravitational energy converter” was installed in front of the dashboard. The box measured 60 by 25 by 15 centimeters. They said it contained 12 vacuum tubes. Out of the box projected a heavy antenna about 1.8 meters long. Also two thick rods protruded about 10 centimeters from the converter’s housing.

When he was ready to go, Tesla pushed the two rods into the box and announced that “now we have power.”

Tesla said the motor achieved a maximum of 1,800 rpm. He said there was enough power in the “converter” to illuminate an entire house in addition to running that car’s engine. The car was tested for a week, sometimes reaching a top speed of 90 miles an hour, without any effort. There were no emissions coming from the car’s exhaust pipe.

The car was kept on a farm about 20 miles from Buffalo, New York, and not far from Niagara Falls.

After the week of testing, they said the mysterious converter box was removed, as was the electric motor, and the original gasoline powered engine was replaced. It is rumored that Westinghouse furnished the experimental motor for the car, and that Tesla sold the patent to his converter box to Westinghouse. Whatever happened, Tesla’s amazing invention disappeared and was never seen again.

Tesla always maintained that electric power plants and wires and gasoline engines were not necessary. He said there was plenty of energy available that was free for the taking. But big business interests never allowed Tesla to introduce what he knew to the world. There was no money to be made from “free” energy.

People who knew about this car later tried to reconstruct it but they ran into trouble acquiring records. It was believed that Pierce Arrow helped in establishing the interconnection between that electric motor and the car’s transmission. But Pierce Arrow went out of business shortly after that, due to the Great Depression. The company tools and records were taken over by Studebaker in South Bend, Ind. And of course, Studebaker also has vanished, with its resources absorbed by the former American Motors Co.

All records of just how Tesla accomplished that fete have since been lost, or else well hidden by special interests that do not want us to ever know how he did it.