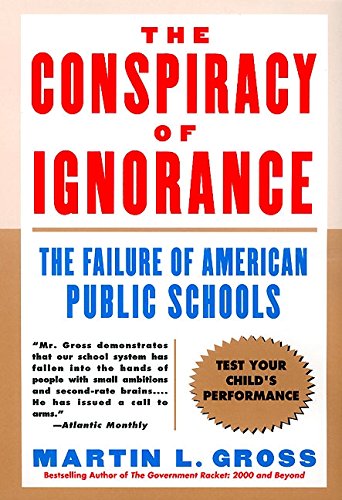 A Deliberate Destruction of Our Education System

For years, working as a news reporter and using my training as a sociologist I have been disturbed by what appeared to be a gradual dumbing down of Americans.

I noticed it several years ago when young people working as store clerks seemed unable to correctly make change at cash registers. This was corrected when computerized cash registers popped up in the stores which automatically calculated payments and returns when cash payment was made. The increased use of credit and debit cards also covered up the inability of clerks to properly add, subtract and divide.
​
My refusal to give up news bureau work and submit to editorial positions that offered long hours and salaried wages put me in a position of being the senior journalist working under young college graduates. Despite their masters degrees these people seemed totally unprepared for the tasks. Their concept of a real news story gradually shifted from our position as a fourth estate of government to that of pure entertainment. We were directed to write light feature stories in competition with the nightly television news. When the Internet opened for the world and free-lance journalists discovered how to use it, newspapers became dinosaurs almost overnight.

Now in my retirement years, as I surf the web and parlay with folks on social media sites like Facebook I am abhorred by the general inability to spell, use proper grammar and accept thoughts that challenge the daily news fed propaganda.

We are in the midst of a new presidential campaign and I am shocked at not only the general thought processes projected by most of the candidates, but also the fact that they are being gladly accepted by voters in state primaries. That so many are jumping in lock step behind such a crass performer as Donald Trump frightens me. While I understand Trump to be a very intelligent man, his platform is incredibly thin and his public rants and sharp barbs lead me to believe he would be quick to destroy any rapport the U. S. might have left with other world nations.

That electors chose a nincompoop like George W. Bush for two consecutive terms, and follow him blindly into two unprovoked wars in the Middle East and allow his agents to write and adopt laws that stripped us of our freedoms seemed bad enough. I had hoped we learned our lesson with George.

I have perceived the dominating Republican House and Senate to be blocking efforts by President Barack Obama to clean up the mess left by the Bush/Cheney gang. And this conflict appears to be based on racial matters in an age when we thought the race problem was at last resolved.

How could our once great nation fall so quickly into this terrible state?

“My students are know-nothings. They are exceedingly nice, pleasant, trustworthy, mostly honest, well-intentioned, and utterly decent. But their brains are largely empty, devoid of any substantial knowledge that might be the fruits of an education in an inheritance and a gift of a previous generation.

“Ask them some basic questions about the civilization they will be inheriting, and be prepared for averted eyes and somewhat panicked looks,” Deneen wrote. “It is not their 'fault' for pervasive ignorance of western and American history, civilization, politics, art and literature. They have learned exactly what we have asked of them – to be like mayflies, alive by happenstance in a fleeting present."

His conclusion: “Our students’ ignorance is not a failing of the educational system – it is its crowning achievement. Efforts by several generations of philosophers and reformers and public policy experts — whom our students (and most of us) know nothing about — have combined to produce a generation of know-nothings.”

In other words, Deneed, who has been involved in educating students at the nation’s finest schools for many years, has decided that the education system has purposefully doled out a different kind of training program for our children. Instead of a scholarly education, the children are being trained to become willing slaves to a corporate system designed to chew them up and spit them out when they are too old and unable to be of any value.

Indeed, as crazed citizens were shooting it out with police on U.S. streets, bombers were mass murdering people by the score in the Middle East and insane weather patterns were sweeping the world, the headlines this very day were centered on the two-year-old ongoing contest for party presidential nominations and which Hollywood film grabbed this year's Oscar Awards. I was surprised that football wasn't included in the mix.