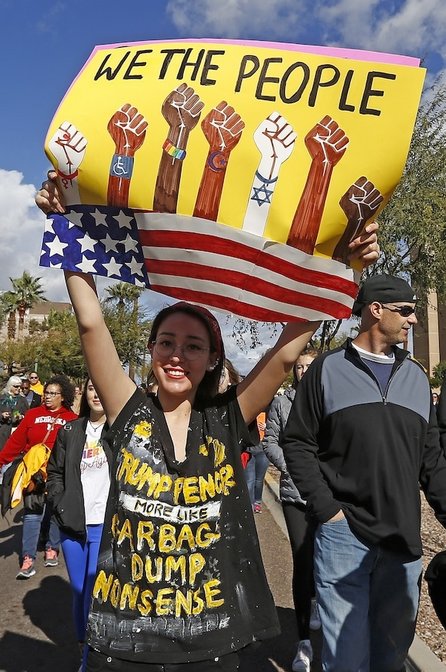 Resisting Authoritarianism; Shut It All Down!

Now that Donald Trump is in power the general public is being shocked daily by the people he is selecting for a cabinet to help him run the nation, by his executive orders slashing the legs out of our existing government system and his fast-track moves to establish what many fear is going to be an authoritarian and dictatorial system of control.

As a writer for Truthout described it in one recent report: Trump has been "governing by executive order, launching a rapid series of initiatives that threaten the democratic constitutional structure of the United States."

His actions have been happening so fast and at such a wide ranging variety of issues that there has been no time to build a resistance to one horror before yet another is slapped in our face.

The attacks range from the loss of women's rights and repair of our deteriorating education system to a threatened deportation of undocumented immigrants, the dismantling of the Environmental Protection Agency, and challenging First Amendment rights to a complete destruction of a complex system of relationships with other nations. There is a renewed threat of an ongoing construction of those controversial oil and gas pipelines, allowance of fracking and offshore drilling for new oil and gas and the destruction of our national parks. Public health insurance programs, the need for repair of the nation's crumbling infrastructure and protection of our dwindling fresh water supplies are among the many other threatened issues.

Trump has maliciously attacked the media, creating accusations of "false news;" he has surrounded himself with a staff of people totally unqualified to properly conduct the business of running our nation, and he appears to be attempting to put the banks, the very wealthy and certain big corporations in control of our government. He has appointed his family to key positions of power and his actions against people of other ethnic, racial and religious orientations is sending strong signals of an anti-democratic and authoritarian position that is against everything this nation has stood for.

Senator Elizabeth Warren came under severe attack on the Senate floor last week while attempting to read controversial letters by the late Senator Edward Kennedy and the late Coretta Scott King that accused Senator Jeff Sessions, the nominee for attorney general, of racial bias. Warren was permanently silenced by the Senate and Sessions was approved for the job.

Both Warren and Senator Bernie Sanders, two Democratic leaders who are fighting the increasing oppression imposed by Trump and his cronies, are advocating increased public demonstrations as the best way of peacefully fighting what is happening in Washington.

The protest groups are forming and some, like the giant women's marches that occurred the day after the Trump inauguration, have been very effective. Mr. Trump, who has a constant eye on the daily news, goes into a personal fury every time a massive demonstration like this, or the airport protest against his ban against Muslims entering the country, makes headlines.

Among the major protest movements in planning:

--February 17: Workers all over the country are encouraged to stay at home from their jobs and out of the stores. No one goes to work, school or into stores to spend money. The idea is to demonstrate how everything depends on the workers to keep the economy solvent.

--March 8: Women all over the world are organizing to reaffirm the power of the women's marches of January 21. They plan to strike to mobilize populations against Trump and his antisocial policies and the "ongoing neoliberal attack on social provisions and labor rights." The organizers are calling this an "international strike against male violence and in defense of reproductive rights."

--May 1: Movimiento Cosecha, or the Harvest Movement, is planning a May Day strike entitled "A Day Without Immigrants." The plan is for all of an estimated five to eight million undocumented immigrants all over the nation to walk off their jobs. Organizer Carlos Rodriguez said "we are encouraging allies and the American public to stand with immigrants across the country by not going to work, not buying any products and not going to school."

These may be just the beginning.

But there is a problem with the protests. There are so many different issues happening all at the same time that the various protest groups have little time to organize and when they do, they may be incapable of showing much strength in numbers.

The editors of Truthout, an Internet publication that is taking a strong stand against the illegal actions of Mr. Trump and his extreme right-wing gang of bandits, are organizing something called The Shutdown Collective.

This is described as an organization of people from Minneapolis, San Francisco, Seattle, Los Angeles, New York City and Southeast Michigan who are working with various protest group leaders to help build general strikes that will be going on all over the nation this spring.

Truthout, which offers articles by such well-known writers as Noam Chomsky, Mikey Weinstein, Naomi Klein, Thom Hartmann, Amy Goodman, Paul Krugman, Robert Reich and Bill Moyers, is a non-profit "alternative" to the mainstream media, which is more and more under the editorial control of big corporations.
​
More information can be obtained by contacting the Truthout Board of Advisers at  info@truthout.org.