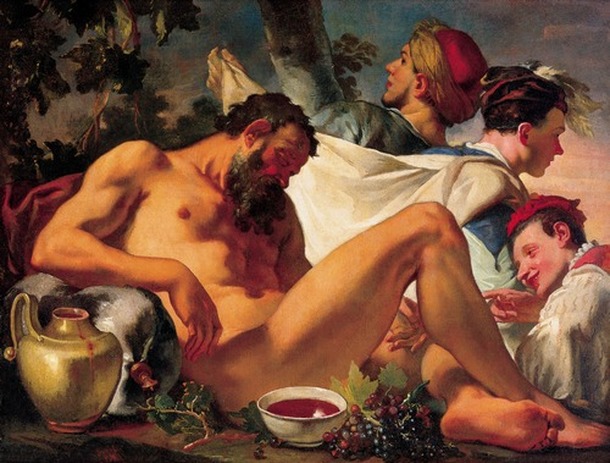 Everybody thinks of Noah as the savior of the human race. That is because of the story in Genesis that says God saw Noah as the only good man left in a world full of reprobates and chose him to build an ark that saved a remnant of all creatures from the great flood.

The facts behind the flood story have been debated for years. But there is another part to the Noah story in Genesis 9:20-28 that may perhaps be even more controversial than the claim that he built a 400-foot-long box that held two of every kind of animal plus all of the food and material needed to keep them alive for months, if not years, while the world was under water.

It seems that after the water receded and everybody could leave the ark, Noah began growing crops and making wine. Verse 21 says: “He drank of the wine and became drunk and lay uncovered in his tent. And Ham, the father of Canaan, saw the nakedness of his father and told his two brothers. Then Shem and Japheth took a garment, laid it on both their shoulders, and walked backward and covered the nakedness of their father. Their faces were turned backward and they did not see their father’s nakedness.”

So when Noah woke up, obviously suffering from a severe headache and probably embarrassed to realize that his boys had covered up his nakedness, he went into a rage. Because Shem and Japheth went to great pains not to look at his naked body, he spent his wrath on Ham. All Ham did was accidentally walk into his father’s tent and witness him lying naked and in a drunken stupor. He told his brothers. They, in turn, devised a plan to cover the old man without having to look at his nakedness. That Ham looked and his brothers didn't was all it took to put a curse on Ham.

But the curse wasn’t aimed directly at Ham. Noah cursed Ham’s children. “A servant of servants shall he be to his brothers,” reads the curse.

In other words, the descendants of Ham were destined to be the slaves and servants to the other civilizations that emerged over the years from the children of the two brothers who chose not to “look” at their naked father.

The implication here is that Ham got some kind of pleasure out of seeing Noah in that naked and drunken state. Yet there is no proof of this. All he did was see and report. The brothers walked backwards, the garment held between them and their naked father, and then cover him.

The story implies that there is something evil about looking at the nakedness of the human body. Strict religious followers still think that way today.

We have to wonder what Noah was doing that he was stark naked in his tent while getting sloshed on wine. And what was so wicked about his nakedness anyway. We seem to remember Adam and Eve cavorting around stark naked in the garden before they ate the fruit that opened their eyes to good and evil. Once they knew better, they became ashamed of their nakedness and covered themselves.

Thus Noah appears to have lost his good standing with God after surviving the flood. Going naked and getting drunk on wine sounds a lot like the general reprobate behavior that pissed off God before he brought on the flood and killed off the whole human race.


Well, it was too late to change his mind now. Noah and his family were the only hope for the rebuilding of the human race. It appears that someone had to take some blame for Noah’s naked drunkenness so the weight fell on Ham and his family.

Perhaps we are missing something here. But from where we sit, it seems that Noah did a pretty good job of passing the blame. But what can we say? As future populations appeared there were going to be leaders and subservient followers. There would be kings and serfs. Someone had to come out on the bottom.

The Genesis story appears to be a fictitious attempt to explain how it all happened the way it did.