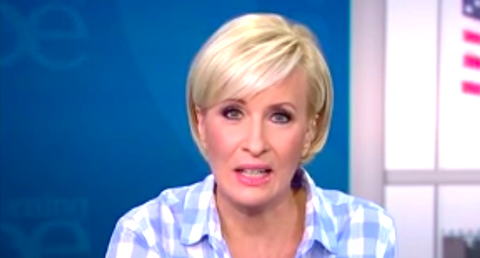 Did She Speak The Truth?
Brzezinski Slip: Is This The New Media Role?

Morning Joe television co-host Mika Brzezinski raised the eyebrows of a few long-time journalists this week when she said she believed the media's job is to "actually control exactly what people think."

Brzezinski later attempted to "clarify" her remark after realizing the storm it caused in the news world. Yet a lot of old-time and experienced journalists, such as myself, have long suspected that what Brzezinski said publicly was perhaps a moment of truth.

Before Mr. Trump began accusing the media of creating "fake news" and lying to readers about what has been really going on in Washington, it appeared to many of us that Brzezinski's description of the media's role was exactly what she said it was.

After devoting a lifetime to working as an American journalist, and following the principles of accurate and balanced reporting taught to me by the old school of newspaper editors and writers, I have been deeply troubled by much of what I have observed occurring in the media in recent years.

Indeed, I noticed the subtle changes occurring while still on the job, working for the daily press under new editors fresh out of journalism school and flashing their freshly gained master's degrees. The degrees gave them license to sit in judgment of the work of the older experienced reporters, but it did not make them always correct in the decisions they made.

The early issues involved the newspaper's competition with television and Internet news, which could deliver information instantly as things were happening. Thus to combat this problem and contain circulaton, the newspapers began shifting to "in depth" stories, reports of significant trends, and lots of feature stories about people and events.

The regular coverage of local school boards, city council, and county government boards were discontinued. We were instructed to just call the board clerks after each meeting and collect a simple list of actions by the boards without watching what happened and explaining why decisions were made.

And this broke a basic rule I always had for the work of journalists. We were once known as the "Fourth Estate." That is, after the executive, legislative and judicial estates acted, the news reporters were always there to keep watch and assure the public that everything was happening above board. We never allowed the crooks access to our tax dollars.

That was then. This is now, when big corporations now own and control the media on nearly all fronts. And with Trump in office, and because of his open assault against the press, Americans should greatly fear that Ms. Brzezinski was being brutally truthful for that one unguarded moment when she sat in front of those MSNBC cameras.

Daryl Cagle, who operates a syndicate that supplies editorial cartoons, wrote this week that he is getting complaints from editors that nearly all the offered cartoons are anti-Trump. They want some pro-Trump cartoons. Strangely, anything promoting Trump these days just isn't funny.

We must fear that what Bzezinski stated is also what many contemporary journalists, or at least their employers, are also thinking. And if this is the case, our nation as we have known it for the past 250 great years, is probably doomed.