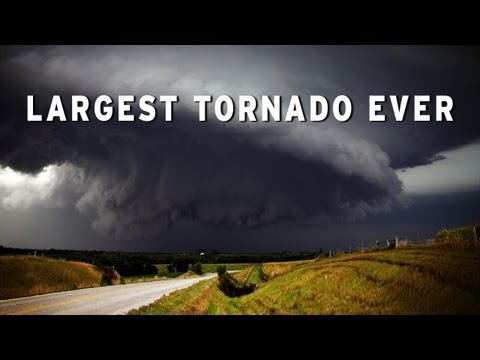 The Jack Sprat list of world issues declares that there has been an increase in the number of tornadoes as part of the dramatic change in our weather patterns. According to Jesse Ferrell, meteorologist for Accu Weather, Mr. Sprat is quite right.

In a recent report on the Accu Weather web site, 2011 ranked as the fourth most deadly tornado year ever recorded in the United States with nearly 1,700 of these violent storms reported. She said an "above-normal" number of tornadoes is expected again this year.
The all-time record was 1,817 tornadoes in the United States, which was set in 2004. The national average over the past ten years is about 1,300, Ferrell said.

The largest and widest tornado ever recorded in the U.S. occurred in June, 2013, at El Reno, Oklahoma. This E-5 twister carved a path 2.6 miles wide and 16.2 miles long and left 18 people dead in its wake.

Researchers Michael Pateman and Drew Vankat found that the frequency of tornadoes in the US has increased significantly since 1950, when the total was about 200. In 1958 there was a major spike in tornadoes when the number hit about 820. The numbers have been on a steady increase ever since.

A report by Joe Romm noted the "obvious increase in tornado frequency between 1950 and 1999," but like most cautious weather observers, he suggested that the hike in the count could be "due to increased detection." He agreed, however, that changing climatic conditions may also be a factor.

Romm said he contacted Climatologist Dr. Kevin Trenberth who said: "There is every expectation that the (tornado) season will move up in time. The warm weather in the US is perhaps an indicator of the nature of the changes to be expected."

Not only are tornadoes occurring more frequently, they no longer appear to be happening in the central plain states that have long been called "tornado alley." They now are happening as far east as New York and Florida and north into Michigan and Wisconsin. They also have been occurring in Europe, Asia, South America and Australia.

Some of the worse tornado clusters from single storm fronts are now ravaging the United States. On January 21-22, 1999, there were 150 tornadoes reported in a storm that swept across the Mississippi Valley, doing their damage in Arkansas and Tennessee. Seventeen people died in the storms. It was one of these twisters that plowed through downtown Little Rock.

The March 2-3 storm of 2012 produced 117 known twisters that touched down in eleven states from Kentucky, Ohio, Indiana, to Alabama, Georgia and Northern Florida. There were 39 deaths.

The property damage from these storms is in the billions of dollars. In addition, meteorologists are expressing concern about the speed at which some of these storms have been moving. There was a time when it was thought such storms moved at no more than 40 miles an hour. Buy one twister in Central Kentucky recently was clocked at moving 85 miles an hour. Some of the tornadoes in Kentucky were estimated to have been moving forward at speeds of 70 miles per hour.

It has only been in the last few years that technology has been developed to allow meteorologists to accurately study the size and velocity of tornados. Thus we are hearing about the various strengths of these storms ranging from F1 to F5. Storms of the F5 category pack winds of 160 miles per hour or higher and sometimes can be a mile or more in width.

Tornadoes that touch the ground remain among the most destructive storms to occur in the world.
​
So yes Mr. Sprat, the number of tornadoes in the world is on the increase and they are getting more and more deadly.