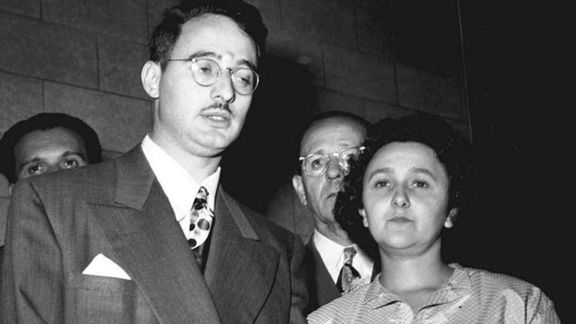 The Execution of Julius and Ethel Rosenberg

Most people in the United States have little or no knowledge about the historic events surrounding the arrest, trial, conviction of Julius and Ethel Rosenberg. They were charged with selling secrets for the atomic bomb to the Russians. It happened in the early 1950's when I was barely old enough to read media reports about the case, but I was duped like most other Americans into trusting in our leadership to be justified in what it was doing.

That was a time when the U.S. was in the middle of the Cold War with Russia; when people were so worried about a potential atomic attack by Russia they were building bomb shelters in their back yards and when school children were instructed to fall on the floor face down under their desks in the event of a bright flash in the sky.

We were reading stories about Russian dictator Josef Stalin and the horrors of living under a Communist regime. We sent troops to South Korea to fight the spread of North Korean communism and got involved in the first of a series of “police actions” designed to hold back the spread of that terrible world menace. The propaganda against communism and Karl Marx, the man who is remembered for advancing the concept of socialism, became intense, especially after the Soviet Union became the first world socialist state. What happened at that time has left an indelible mark on the American psyche to this day. Older Americans perceive the extreme concept of communism as the leading economic model threatening the U.S. capitalistic system.

It was unfortunate that the communist model overpowered Marx’s ideas for a “social democracy.” We in America saw the ruthlessness of a communist dictator operating under an extreme corrupt concept of socialism. During the 1920's when the United States was plunging into the first great depression, a lot of people were interested in getting rid of the capitalistic system, where big business was operated by a board of directors. U.S. workers were fighting to join unions and seeking better wages and improved working conditions in what were then no more than slave shops. Thus a lot of people, including civic leaders, movie stars and others of prominence were joining both socialist and communist political movements. They were not anti-American. They were just seeking a better economic system that would be fair for everybody.

The idea of the workers sharing ownership of the factory and sharing in the profits rather than answering to the drums of an unsympathetic board of directors was appealing to the poor working class. It is an idea that has returned today under the extremes of another extreme right-wing Republican government that is stripping all forms of socialism created during the depression years and creating another chasm between the rich and poor.

The propaganda machine jumped into full gear after World War II. Its spokesman was Senator Joe McCarthy who began condemning the rise of communism in the nation and naming top people not only in Washington but in the entertainment business who were “card carrying members” of that evil “socialist movement.” In the way the propaganda was played, socialism was a word that was synonymous with communism. That card was played so well that many older Americans today still resist the idea of swinging from capitalism and considering a socialist economic system. They seem to be accepting the radical moves to strip the government programs designed to help the poor and middle class.

The Rosenberg case became the cornerstone for the anti-communist propaganda machine. They were both professional people. Julius was an electrical engineer who worked for the Army Signal Corps Engineering Laboratories at Fort Monmouth, NJ during World War II. It is said that important research on electronics, communications, radar and guided missile controls was done where he worked.

Ethel was working as a secretary for a New York shipping company. When she got involved in a labor dispute she joined the Young Community League where she met Julius in the 1930's. During the war, when Russia was an ally with the United States in the conflict against Germany, Julius Rosenberg got involved with Ethel’s brother, David Greenglass, who was supplying documents from Los Alamos that were passed on to Russian agents. Also involved in the U.S. spy ring in those days were Harry Gold, who operated as a courier for Greenglass, and Klaus Fuchs, a German scientist.

After the war when The Soviet Union began testing nuclear bombs and America entered what has been known as the Cold War years, the anti-Communist rhetoric began flowing. Russia and the United States were building armaments as two great nuclear powers and there was growing concern that the world may be heading for a destructive nuclear war. That was when Senator McCarthy began his campaign against well-known members of the communist party and the U.S. was getting involved in the Korean conflict. The FBI was busy trying to learn how the Russians got the technology for building nuclear bombs.

Historians now tell us that the concept of atomic fusion was well known to world scientists. While the United States was secretly rushing to develop an atomic bomb, so were researchers in Germany and Japan. It is logical to assume that Soviet scientists were involved in that program as well.

It appears that the Rosenbergs became the scapegoats for the U.S. propaganda machine. While it was later proven that Julius was truly involved in passing military secrets to the Soviets during his time at Fort Monmouth, it was never shown that he ever passed atomic secrets. Yet he and his wife, Ethel, were arrested, convicted and publicly executed on charges of “conspiracy to commit espionage.” They were both put to death on the electric chair. It was never proven that Ethel was involved in the case other than she knew what her husband was doing and occasionally assisted in his work. To date she has been one of only 15 women who have ever been electrically executed in the United States.

Obviously the Rosenberg case was highly sensationalized. David Greenglass, who was sneaking documents from Los Alamos, was also arrested and convicted, but served only 10 years in prison. Gold who was the courier for Greenglass got a 15 year sentence, and Fuchs served nine years and four months for his role. The Rosenbergs were identified as the “ringleaders” of the spy ring.

The children of the Rosenbergs have since battled in the courts to clear their parent’s names. While information about the case has since been declassified, they have detailed Julius’s role as a courier and recruiter for the Soviets, but Ethel’s role was no more than an accessory. In recent years there have been serious questions whether either of the Rosenbergs deserved the death penalty for their actions.

This question was raised by a segment of the public even while the pair was waiting for the execution at Sing Sing Prison. Because of the propaganda spewing from the pages of the newspapers at the time, however, most people believed the Rosenbergs had been fairly tried and convicted. After President Dwight D. Eisenhower spoke out in support of the sentence, there was no chance for acquittal.
​
The two were executed on June 19, 1953.