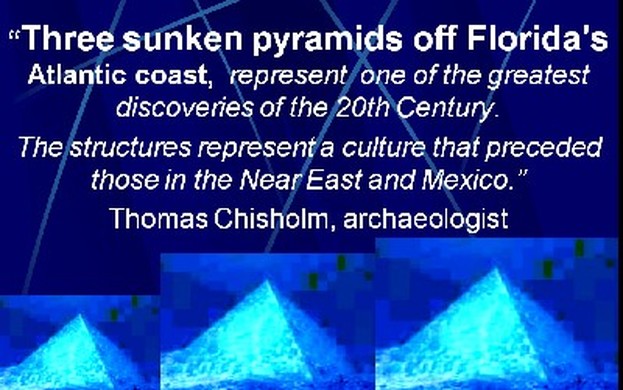 It has been known for about half a century that massive stone buildings were spotted by sonar equipment in Atlantic waters off the Cuban coast. Linda Moulton Howe on her website Earthfiles, reported in 2001 that the sonar readings indicated a large area of images of buildings, roads and even pyramids.

The first sonar readings in the area were allegedly made sometime in the 1960's, but investigation was halted because it happened during the Cuban missile crisis.

Now a story in Ancient Origins reveals that researchers Paul Weinzweig and Pauline Zalitzki, a marine engineer, and her husband, Paul Weinzweig, of Canada, have confirmed the ruins of a giant city off the far Western tip of the Guanahacabibes Peninsula, Cuba.

The couple, owners of Advanced Digital Communications, were working with the Cuban government on a marine survey mission, looking for historic and treasure-laden shipwrecks when they made their discovery. They were using advanced sonar equipment to examine a two square kilometer area of the sea floor when they came upon geometric stone structures making up what turned out to be a very large urban complex, lying about 600 feet under water.

They have since been back at the site with Manuel Iturralde, senior researcher of Cuba's Natural History Museum, and using a remotely operated submarine to study and film the structures. What they found were 8 by 10-foot cut blocks of stone stacked on top of each other. They also reported finding roads and pyramids.

An image of three submerged pyramids has been circulating the Internet. It is difficult to determine the size of these structures but writers are claiming they are larger than the Great Pyramid of Giza.

Naturally other writers have been quick to suggest that the ruins are part of the fabled lost continent of Atlantis. Zelitsky and Weinzweig are refusing to accept this idea, however.
Zelitsky said the Atlantis story is a myth. "What we have found is more likely remnants of a local culture."

They are suggesting that there may have once existed a 100-mile "land bridge" that linked Cuba with the Yucatan Peninsula of Mexico and that Cuba is part of a larger land mass that either sank into the sea, or was flooded at the end of the last ice age.

Iturralde noted that there are legends among the Maya and native Yucateos that their ancestors once lived on an island and vanished under the sea.

Zelitsky said the Anthropology Department at the University of Veracruz has been studying ruins of the Olmec civilization and became interested in the ruins. "When they saw these submarine images they found similarities and parallels with the ruins found in these excavations that the Institute was undertaking. The Olmecs and other native peoples all have primary morphology marking the arrival of this continent. This means coming from the direction of Cuba."

Spanish journalist and television personality Luis Mariano Fernandez wrote that the aborigials of the Yucatan and the northern parts of Central America have a legend that they "originated on an island that sank by cataclysm. This island is called Atlanticu."

In an interview with Fernandez, Zelitsky said: "Morphologies indicate that they belong to three families who were saved. One of these families came to the coast of Veracruz, which are supposedly the Olmec. Others came to Central America and traveled to the Pacifric coast, and these families created the civilization of the Americas as we know it today.
​
"When anthropologists saw these underwater carvings, stone monoliths, some symbols and inscriptions, they were identified with Olmec motifs. They were very surprised."