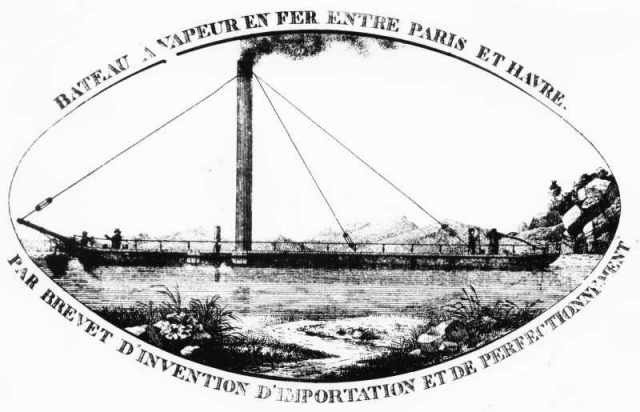 When French ironmonger Charles Napier and his son, Charles, ordered construction of the first iron hulled steamship on the Staffordshire, England, in 1821, people thought they were crazy.

In fact, the general opinion was that such a vessel could sink the moment it was launched. Nevertheless, the vessel was fabricated at the Horseley Ironworks, owned by Aaron Manby, and then assembled at Rotherhithe on the Thames River.

Contrary to the prevailing wisdom of the day, the flat-bottomed, 120-foot iron-hulled vessel not only floated, but it drew about a foot less water than the wooden steamboats anchored around it.

The Napiers named the strange new steamship, with its massive side wheels and tall smoke stack, the Aaron Manby. Thus the Manby not only had the distinction of being the first iron ship to be built anywhere, it was the first to steam out into open waters of the Atlantic.

After trials in May, 1822, the Aaron Manby, under command of then Captain Charles Napier, crossed the English Channel to Le Havre on June 10 before steaming up the Seine to Paris. There it was used to make regular trips on the river until 1830 when the owners sold the vessel.

As a flat-bottomed vessel, the Manby always remained a river barge. The second owners used her on the Loire River at Nantes.

No photographs or drawings of the vessel could be found. It was described as made of quarter-inch-thick iron plate fastened to angle-iron ribs. She had a single wooden deck and a bowsprit. The 47-foot-high funnel and 12-foot round paddlewheels gave the vessel a distinctive profile.