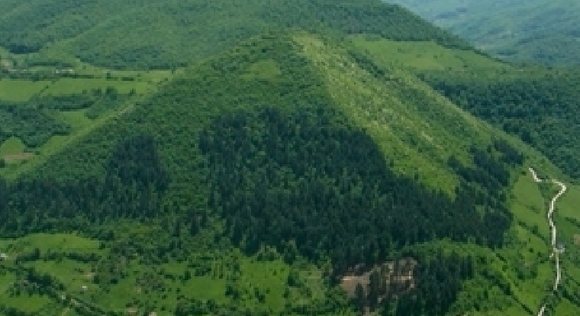 Found in Bosnia
The Myth Of The 12 World Pyramids

Everybody knows about the pyramids of Egypt. Most people also are aware of pyramid-type structures built by the ancient civilizations that once inhabited the jungles of Central and Northern South America.

But there are other pyramids that exist, some in China, India, and the ruins of a large pyramid also were found not long ago in the swamp lands of South Florida.

In short, large stone pyramids seemed to have existed at one time in the distant past all over the world. Over the years I have wracked my brain attempting to link some common thread to this phenomenon. How could people so far apart be interested in building massive stone structures of the same basic design? What or who motivated them to take on such monumental tasks?

It was almost as if some superhuman entity . . . alien visitors perhaps . . . dropped down out of the sky and gave the instructions and the basic blueprint for the structure they were to erect. That the work involved cutting and lifting stones of phenomenal weight, it even may be suggested that there was extraterrestrial help in doing the work.

Could it be that all of these colossal stone megaliths, including such unexplained mysteries as Stonehenge in England, and the strange heads peering out to sea from Easter Island, were put there for the same reason. And was that reason to remind us of who we are. We were to remember that we are descendents of the star people or that the Earth is our Mother. I like to think that we were to remember our covenant to care for the Mother Earth so that we, as a people, might live and prosper for a long time.

With that in mind, I was fascinated by some writing I found on the Crystal Links website titled the Twelve Pyramids of Thoth. Thoth, identified as an Egyptian Moon god, claims to be the overseer of the great pyramid of Egypt. The message in this work was that the Egyptian pyramid was the last of the 12 great world pyramids to be built.

The first, he said, is located under the ice in Antarctica. The others are in Tibet, Lumeria (a legendary lost continent in the Pacific region), Atlantis, Mexico, Peru, Europe, Australia, Canada, Middle East, United States and finally Egypt.

Indeed, pyramids, or at least the remnants of what may once have been large pyramid type buildings, have been found in most of these places. I am not sure about Australia but then I believe there are secrets hidden in that desolate land that are known only to the aboriginals. The locations of both Atlantis and Lumeria are either unknown or long disputed.

What interested me was a prophetic message in the information linked to the Antarctic pyramid. It says this structure is a portal to other planetary systems and its function is to assist in the comings and goings of alien entities who have been part of the history of Planet Earth.

“These entities came to the planet in great spaceships and interacted with those who lived on the planet, in the water, and below the surface,” the messenge says.

The kicker comes with this: “And when this book is found, the ice shall melt from this place, revealing starships created by this pyramid, left behind as reminders of their work and interaction on your planet.”

That the book is known is a clear indication that if it is ancient, it has indeed been “found.” That we are watching with alarm the global warming reports that both the Arctic and Antarctic regions are melting. Many of us could live to see the day when the entire continent of Antarctica will be exposed, as will all of the ancient artifacts that once existed there.

If a giant pyramid and starship is found there, it will change the thinking of the world forever.