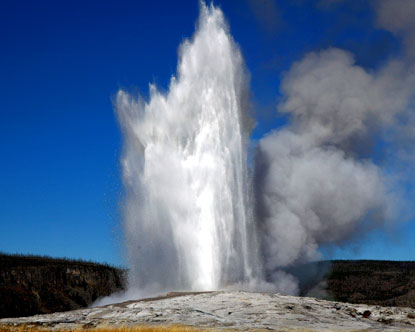 Jack Sprat worries about what he calls "new" geysers that he believes are appearing all over the world. While we have found reports of a few new geysers of water, steam, mud and even sand, there also are reports that old geysers that have long been dormant are springing back to life.

In 2005 a number of geysers all spewing mud and natural gas appeared throughout the countryside in rural Kingfisher County. Some of the geysers were from a few hundred feet apart to up to 12 miles apart, local authorities said.

In Yellowstone National Park, home of some of the most famous geysers in the world,Steamboat Geyser erupted for the first time in eight years. Also the dormant Morning Geyser has awakened after remaining quiet for 18 years. Other long silent geysers, including the Norris, North Goggles and Fountain, have all become active after also staying quiet for a few years. Park officials say Morning Geyser sends hot water and steam 200 feet into the air when it blows.

In 2005 a number of geysers all spewing mud and natural gas appeared throughout the countryside in rural Kingfisher County. Some of the geysers were from a few hundred feet apart to up to 12 miles apart, local authorities said.

In Northern California, in the Clear Lake geothermal field of geysers spanning an estimated 45 square miles, there was a swarm of minor earthquakes earlier this year. This field, which sits right over the great San Andreas fault is considered the largest field of geysers of their kind in the world. Like Yellowstone, Clear Lake is an ancient volcano that has not erupted in thousands of years. That the geysers are hot suggests that there is still an active magma chamber under the earth.

There are active geysers like these spewing their energy in key places all over the world. Some of them are known to exist deep under the oceans of the world.

Of course there are many natural geysers in existence that have been well known for centuries. They have been found in nearly every continent, but as far as we can learn, none of them are any more active today than they were in past years.

But yes Mr. Sprat, there is a sense that some of the geysers are becoming slightly more active and that something important may be occurring deep in the ground.