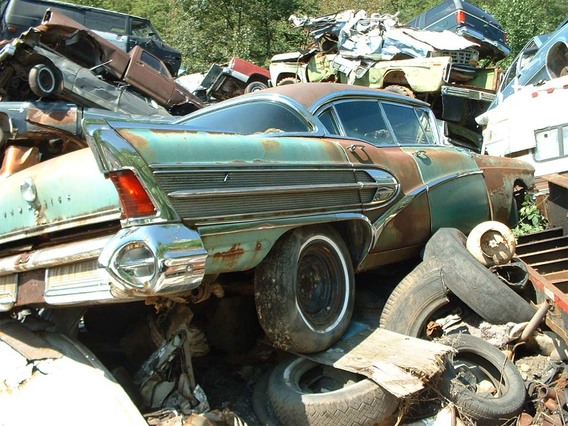 Lets Get Rid Of Planned Obsolescence

I remember admiring the writing of great authors and journalists and strived to make my command of the English language so good that every story I wrote was worthy of the by-line by editor posted with it. My father was a perfectionist; a man of many talents and interests; and I am sure I was influenced by the fact that he always insisted on quality workmanship.

My shop teacher in high school also was a perfectionist. He taught us to put our hearts into everything we made. I remember when he was building a new home and he discovered that a brick wall he erected was a quarter inch off plum. He tore that wall down and did it over.

That way of thinking is quickly disappearing.

Today we live in a world of planned obsolescence. The things we purchase . . . even our homes . . . are designed to last a few years before they fall apart. The idea is that when things break and are unfixable, we rush off to the store and buy a replacement. The original object is tossed away like a useless piece of trash.

Cars that lasted up to 100,000 miles were rare. By the time they ran that distance the piston rings were worn, the vehicle was spewing blue smoke from the oil that was slipping into the gasoline. The shock absorbers were no longer working. Mufflers and tail pipes were rusted and falling off. Alternators were no longer keeping the batteries charged. Everything was rattling. We believed the propoganda and agreed that it was time to junk the car and buy something better.

Our parents and grandparents who lived through the war years would not say this. They were forced to drive their old cars and keep them in good repair. Everything; even their food was rationed. The nation's resources were turned for the war effort.

The newer generations never learned this lesson. It became a way of life to expect to replace things. But something has been happening that is forcing us to change our way of thinking about planned obsolescence once more. The cost of products has been rising faster than our income. Many of American jobs have been moved overseas where people will work longer hours for less money and no benefits. Consequently we are shopping for products that last longer. Or when things break, we are learning to get along without replacing them.

As the money supply in the world is being seized by a small number of very wealthy families and corporations, there is less money in circulation. Consequently, some towns are beginning to develop alternative ways of doing business. They are creating local money. They are returning to the old barter system. A carpenter works on a grocer’s home in exchange for food for his family. A mechanic repairs his plumber's car engine in exchange for having his leaking sewer line dug up and repaired.

As humanity slips back into simple labor for one another, we are returning to the concept of pride in workmanship.

Something amazing recently occurred in France. The government there passed a law requiring manufacturers to publish the expected lifespan of their products. This allows buyers to decide whether to pay more for a kitchen appliance designed to last for 10 years, or buy on the cheap for one that is guaranteed for two years.

The idea behind the law is to combat a growing problem of trash that is clocking the landfills and being dumped in the world’s oceans. It is a waste of resources that are quickly running out. And it is completely unnecessary.

Because of media-inspired style changes, people are tossing away an estimated 1.5 million tons of clothes, over 6 million electrical appliances and an untold amount of cheap plastic toys, bottles, wrappers and other devices that now clog the world’s oceans.

The world’s environment is getting hit so hard by human waste that it is only a matter of time before this planet is too polluted for us to live here any longer.

Our way of life must change. The concept of planned obsolescence must be among the first things to go. France has set the standard. We propose similar laws for all of the other nations of the world.

When we choose to purchase something, it should be a product made by skilled hands and designed to last a lifetime if not longer. A good clock should be something that can be passed down from generation to generation without fear of worn-out parts and broken springs.

A good car should run for 100,000 miles and with proper maintenance, still be running well.

Good homes and office buildings should still be standing as long as the pyramids.
​
It is not an impossible dream. This is something we must do if we expect to occupy this planet much longer.