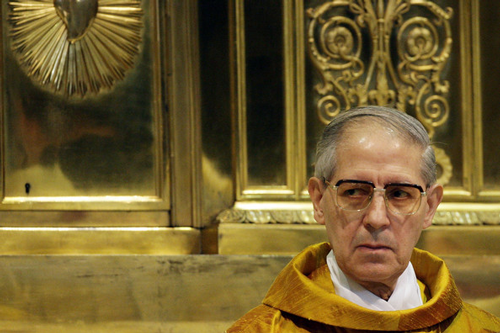 Contemporary writings by William Garner and Sean Maclaren point to secret world government rule by the Jesuits, under a Black Pope, as a controlling force that has been operating for hundreds of years.

Garner’s book, Who Really Owns Your Gold, and Maclaren’s sequel, The Black Pope and the Jesuit Militia Distort the History of the United States of America, describe what they believe has been a Jesuit controlled shadow government that has skillfully controlled kingdoms, dictatorships, democracies and religions throughout the European world and the Americas for centuries.

They describe the Jesuit control as “a powerful and most secret dictatorship” that controls the media, our banking system, big business, and who we choose for leadership, and does it all so that the masses believe they enjoy prosperity, freedom of speech, freedom of religion and live in independence. In reality citizens of all nations, including the United States, live in a slave state of dutiful taxpayers and obedient workers, just as they did as surfs under the great kingdoms during the Middle Ages.

Maclaren claims on his website that “all governments are controlled by one entity . . . each government was carefully designed and constructed, its leaders identified, groomed and emplaced not on merit or popular vote but by their degree of subservience, personal chemistry and public charisma. The U.S. government is no different.”

Garner theorizes that Lorenzo Ricci, the Eighteenth Superior General of the Society of Jesus (considered the Black Pope of the Jesuits at the time of the “suppression of the Jesuits in 1773,”) did not die in prison as historians report, but faked his death, escaped to America, and worked with the Jesuits using the “playbook” Perditorus Rex, established a 170-year plan for subjugating the nation to Jesuit control.

Under the plan the first step toward establishing a governing rule is to secure the land. In the case of the North American colonies, this step had already been taken. By the time Ricci got involved the colonies were already established and many of the colonists were considering rebellion against the Crown of England. Much of the land east of the Mississippi River was part of the colonial rule and the second step, the destruction of the native culture was well underway.

Maclaren noted: "the small pox and influenza viruses, among other cultivated viruses and bacteria, killed more people in a short period of time than any natural geologic disaster or seasoned army could ever have done in years of continuous war. The Jesuits knew the power of the Plague and wielded it like a 100-ton megaton nuclear device.

"Those who were not killed by the great viral bomb were either enslaved or forced to settle elsewhere. Either way, the Native Americans lost their lives, homes and livelihood to the invading white warriors from Europe."

As government rule was formed the Jesuits were deeply involved in the Revolutionary War and the aftermath.

"We are taught that America fought and eventually won wars of independence from England," Maclaren wrote. "But the reality is that our 'victory' was a carefully staged series of events that created only the illusion of freedom and liberty among the American people, and actually delivered something altogether different; a subjugated system well on its way to becoming one with a fully enslaved population, which is what we see today."

He wrote that numerous people realized what was happening and attempted to expose the Jesuits. They wrote books and papers. But they were soon killed and their writings burned. It was clearly understood by Jefferson and the other "organizers" of the Constitution that they were but puppets of the shadow government that was already in control.

According to Maclaren's paper: "In 1871 the Jesuits formed an international corporation known as the United State of America within the bounds of the District of Columbia. To do so, the Jesuits had Congress pass 'An Act To Provide A Government for the District of Columbia,' which effectively nullified the original Constitution. The new Constitution of the United States of America . . . functions on behalf of the owners of this corporation, the Jesuits."

Maclaren said the careful manipulation of the American people was so cleverly carried out that people never understood what happened behind the scenes. Today, as more and more truths are exposed, there is no national revolt because the people are numbed by drugs, toxins in the food, mind-controlling movies and television shows, slanted news coverage, sports and other mindless forms of entertainment and distractions.

"Our government today is a puppet show of epic stature and high production value, artistically created and painted in grand fashion by experts in the art of gentle manipulation and persuasion of the American and worldwide public, the vast majority of whom swallow the bait wholesale. Not only that, they beg for more," Maclaren wrote.
​
Is the story true? Is the Black Pope and the Jesuit Order the shadow government controlling the affairs of the world? We will be exploring this thesis farther in future reports.