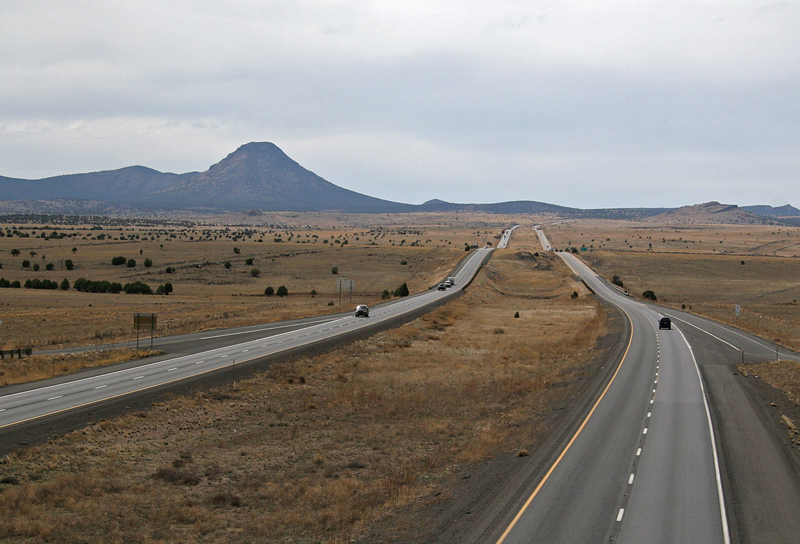 A little over a year ago my daughter Jennifer and I spent seven days traveling across the United States, cramped in the cab of a large U-Haul truck, after selling our Michigan home. We followed the same route we took with my late wife, Doris, nearly 20 years earlier, angling down through the Midwestern states until reaching Interstate 40, then driving west from Oklahoma through the Panhandle of Texas, into New Mexico, and through Arizona.

We were headed for the west coast and would normally have taken a more northern route. But we were driven south by a constant march of violent stormy weather that had even then been ravaging the heartland of the nation. The storms changed from winter gales to violent spring thunderstorms, complete with large hail stones, high winds, dangerous lightning strikes and tornadoes.

By the time we finished packing the truck and left the Keweenaw for the last time, the western sky was showing clear signs of yet another storm front. Just as we reached the comforts of a motel in Madison, Wisconsin a violent electrical storm was upon us. Even from the ground floor of a three-story building, we could hear the power of that storm. Tornadoes were spotted, trees were toppled and power lines were broken in and around Madison that night. The next morning we drove out of the devastation in sunshine and continued south and just ahead of the bad weather from that day on.

As we traveled over America’s farmland it was shocking to see crops standing in water-soaked fields, and noticed how high the water was in the inland lakes and streams. Some of the rivers were still slightly at flood stage. News reports as we traveled told of heavy rains of three to five inches, and hail stones as large as golf balls slamming the land just on our heels. How glad I am that we are not making that trip this season when the storms are even worse and the Mississippi is flooding over the levies.

By the time we were in Oklahoma, we found the heat. Stepping out of the air conditioned cab every time we stopped for gasoline or food was a shock. We drank a lot of water and fruit drinks as we made our way.

The summer months were upon us and we expected the roads to be packed with vacationers. But this was not the case. With gasoline prices hitting record highs the highway traffic was changed dramatically. There were a few motor homes, but most of the vehicles on the road with us were trucks. In fact the Interstate was basically a truck road with a few small . . . and I mean ultra-small cars sneaking along among us. It was obvious that the travelers were abandoning those big SUV’s for the new compact green energy vehicles. They recklessly darted in among the trucks like little bugs. From high up in the cab of our truck we worried that we might accidentally run over one of them without knowing we did it.

We also discovered that no matter which motel we picked, and no matter how late the hour, there were always rooms. When Doris and I last traveled the highways we either called ahead for reservations, or stopped early in the evening to be assured of a room. Some of the motels were falling into poor repair.

Another concern was the rusted, apparently unused railroad tracks that run along the interstate. When we took this route two decades ago, the trains were our constant companion. They ran three, four and sometimes five engines pulling rows of cars stretching for miles behind them. Now everything seemed to be packed in trucks. Signs on the backs of many of the trucks announced jobs for drivers. Why have we abandoned our great railroad system? Why are we not investing in new high speed rail to carry our people and goods?

America’s roadway system is deteriorating. While we passed several construction sites, most of the roads were bumpy and poorly maintained. Riding in that big truck was a jarring experience. The best we could do each day was stay on the road for about eight hours. It was a chore each morning to crawl out of bed and consider yet another terrible day on the road.

When we stopped at the rest areas, our truck parked in a row with all of the other trucks, I couldn’t help but notice that the drivers of most of those rigs were older, overweight, grey-haired men, sometimes limping or hobbling along. Their rigs were mostly designed for long hauls, with sleeping quarters attacked to the cab area. Yes, there are jobs available for truckers but it is an obvious hard life. Our seven days on the road wore us to the bone. I would not like to do it again.

We made a point out of stopping one night in Holbrook, Arizona, the place where we began our western adventures as a family in 1995. It was sad to see that the motel on old Route 66, where we lived for about a month, was now an abandoned and deteriorating ruin. Some of the places we once visited and shopped were empty.

All along the way the homeless were waiting with arms outstretched. I never thought we would see such sights in America. When stepping into one restaurant a man holding the door for me complained about the “beggars” in the parking lot. “They need to get a job,” he said. He did not know that the elderly man he was speaking to was gambling all that he had to start over in a new place. One wrong turn and I knew that I too might easily end up among the homeless souls he looks upon with such disdain. I wondered how secure this man was in his own position in life. It seems as if Americans are all living on the edge.

We arrived on June 21, the Summer Solstice. It is the longest day of the year when the Earth reaches its maximum axial tilt toward the Sun. As we drove north along the California coast, a bank of high clouds hung overhead, and consequently we were treated to one beautiful sunset. As tired as we were, the scene was like a reward. It was as if the Mother Earth was telling us that everything was going to be just fine for us in our new home.