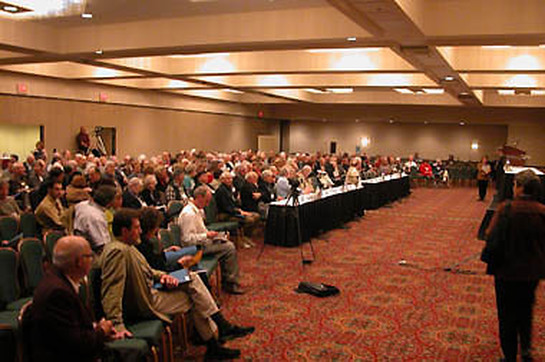 Shocking Findings of The Jesus Seminar

In 1985 there occurred a gathering of Bible scholars at Berkeley, California, to create a seminar for the intellectual study of the life, sayings and events that surrounded the life and teachings of Jesus. Thus evolved what was known as the Jesus Seminar, a group of up to 200 various experts on theology and Bible history that lasted until 2006 before the results of the ambitious study were published.

Theist Gary Shadle’s said in his review of the findings: “The quotes and deeds of Jesus as written in the Gospels are mostly mythical. Only eighteen percent of the sayings and sixteen percent of the deeds attributed to Jesus were thought to be authentic.”

The Fellows of the Seminar, representing the best minds of North America and Europe, met twice a year to debate technical papers that were prepared throughout the year. They looked at anthropological, historical and archaeological evidence, carefully examining the history and society that existed in first-century Palestine in reaching their findings.

Shadle, who maintains a website 889 Reasons Christianity is False, wrote that the conclusions were:

--Jesus was born in Nazareth during the reign of Herod the Great. His birth did not occur in Bethlehem.

--His mother was Mary. He had a human father but his name may not have been Joseph.
--Jesus was born in Nazareth, not in Bethlehem.

--Jesus was an itinerant sage who shared meals with social outcasts.

--Jesus practiced faith healing without the use of ancient medicine. He relieved afflictions believed to have been psychosomatic.

--Jesus never walked on water, fed a multitude with a small basket of loaves and fish, changed water into wine or raised Lazarus from the dead.

--He was arrested in Jerusalem and crucified by the Romans. His crime was that he was considered a public nuisance, not that he claimed to be the Son of God.

--Jesus was not raised from the dead. The belief in the resurrection is based on visionary experiences of Paul, Peter and Mary Magdalene.
​
The founder of the seminar, Robert W. Funk, of Westar Institute, said at the very beginning of the research work: “We will be asking a question that borders the sacred, that even abuts blasphemy, for many in our society.” In spite of the fact that the findings might provoke hostility,” we will set out, in spite of the dangers, because we are professionals and because the issue of Jesus is there to be faced, much as Mt. Everest confronts the team of climbers.”