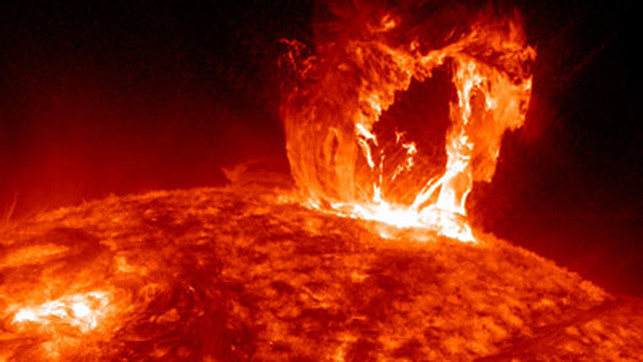 A few years ago night radio host Art Bell had frequent interviews with remote viewing instructor Maj. Ed Dames. Dames spoke more than once of getting future visions of a deadly solar flare that he believed would have the capability of killing half of the world’s population.

As our source for this series, Jack Sprat has listed increased solar flares among his list of concerns, we have taken a look at the new solar activities and see what the experts are saying about the dangers the flares may bring.

It is well known that our sun goes through periods of activity known as Solar Cycles, when great storms viewed as "sun spots" appear on the surface. From these storms are emitted great flares of energy that shoot off into space in all directions.

A solar flare is an intense burst of radiation that is projected from the explosive release of solar energy. Scientists classify these flares according to their X-ray brightness. They range from C-class to M-class and X-class. When the M and X-class flares strike the earth they have the capability of causing brief radio blackouts, affect satellite transmissions and even knock out electrical power grids. Generally they produce bright and colorful electrical displays in the night sky that we in the United States call the Northern Lights.
NASA has dubbed the effects of the release of solar energy as "space weather." There is a daily website that is designed to keep interested parties up to date on everything going on with the sun its effects on our planet.

Mr. Sprat is correct in suggesting that there has been an abnormal amount of activity on the sun. After months of strange quietness, with no sun spots observed at all, the sun has now returned to life with some of the largest storms and energy flares observed in years. While scientists are remaining relatively quiet about it, the sun appears to be out of sync with its old cyclical behavior and shooting more energy than usual out into space.

The NASA Solar Dynamics Observatory recorded the first X-class flare in July, 2012, which followed a string of 12 M-class flares that occurred in just six days. The flares affected radio signals all over the earth. The flares came from a massive sunspot group estimated to be 118,681 miles wide across the sun’s surface. So was this the beginning of a new solar assault on our planet?

In 2009 an international panel of experts led by NOAA and sponsored by NASA released a new prediction for the new Solar Cycle 24, which they said would peak in the spring of 2013. But the sun surprised everybody and after being active for most of 2010, it went quiet for weeks during 2011, then recently sprang to life with a fervor that has had NASA, the telecommunications companies and especially the astronauts living in the International Space Station ducking for cover when the energy flares come at us.

Dean Pesnell of the Goddard Space Flight Center said: "It turns out that none of our models were totally correct. The sun is behaving in an unexpected and very interesting way."

The usual solar cycles, observed since the mid-1800's, show patterns of 11-year periods. Some cycles are as short as nine years and others last up to 14 years. But the average has been 11 years. But our sun is a strange and unpredictable ball of fire that seems to like to surprise and baffle world scientists. For example, during the Seventeenth Century, they said it plunged into a 70-year-long period known as the Maunder Minimum, when there were no sun spots or flares.

While damage from the latest round of intense radiation bursts has remained minimal, nobody is forgetting the geomagnetic storm of 1859 that electrified transmission cables, set fires in telegraph offices and produced Northern Lights so bright it was said people could read newspapers by their red and green glow.

The concern is that this happened before we had wireless transmissions of radio, television, telephone and GPS positioning services for ships, aircraft and even travelers on the road in their cars. In 1859 the electrical grid did not exist. Computers had not yet been invented. The world was a much different place.

In addition to electromagnetic radiation, solar flares send out coronal mass ejections, or bursts of particles and electromagnetic fluctuations that can blow out transformers in power grids and collide with critical electronic components in satellites.

A recent report by the National Academy of Sciences predicts that if a storm like that occurred today it would knock out most world communications, possibly cause massive electrical blackouts, cost trillions of dollars in damages and take from four to 10 years before there could be complete recovery.

NASA does not believe Ed Dames’ vision of a killer solar blast will ever happen, at least in our time. No one has ever seen a flare worse than the X-class type. And while the sun can send a lot of heat and energy flying out into space, they say it has a long way to travel through the extreme cold of space before reaching earth, such a blast would lose its energy.

But suns burn out in time. During the process they turn into red giants and expand far into space. It is estimated that millions of years from now our sun will go through this process, burning up Venus, Mercury and possibly the Earth before it dies.

But that is not going to happen in our lifetime, the experts assure us.
​
Yes Mr. Sprat, there has been increases in major solar flares and you were quite right when you included it in your list of concerns. Many believe the sun and our earth are sentient beings who communicate with one another. Could it be that they are working in harmony to make some adjustments on our planet to correct the damage mankind has caused?