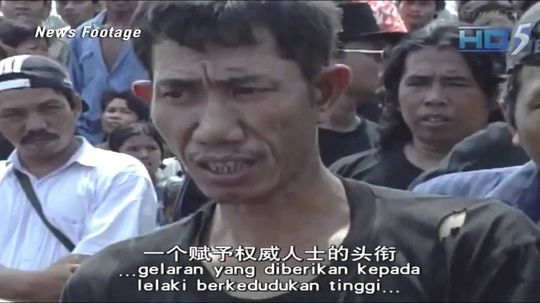 Ahmad Suradji sold himself as a “dutak” or ritual healer who had the ability to make women beautiful. But women who came to Suradji for his services often were never seen again.

He was arrested after the body of one of his female clients was discovered buried in a sugar cane field. She had been last seen alive at Suradji’s home.
His arrest became a sensational story throughout Indonesia in the late 1990’s because there was an investigation that led to the discovery of many more ritual killings. Before it was over, the man was convicted of strangling 42 women. All of their bodies were uncovered in the same field.

Police not only arrested the 57-year-old Suradji, but also his three wives, all sisters, for assisting in the murders and helping to bury the bodies. One of the wives, Tumini, was tried as his accomplice.

During the investigation, Suradji told police that his father’s ghost came to him in a dream and told him that if he killed 70 women and drank their saliva, he would become a powerful mystic healer. This was what he was in the process of doing when authorities caught up with him.

Police said the victims ranged from 11 to 30 years of age. The murders had been going on over an 11-year-period before Suradji was stopped.

They said Suradji, who was a cattle breeder by trade, promoted himself as a shaman who could not only make women more beautiful, but heal any kind of disease. He then lured his female victims into the sugarcane field near his home, buried them up to the waist, and then strangled them while they were helpless to defend themselves.

After drinking the saliva of his corpses, Suradji strangely reburied the bodies with their heads all looking toward his nearby house.

The courtroom was packed when the sensational trial of Suradji began in Lubuk Pakam on December 11, 1997. In spite of the evidence, and a 363-page court document listing details of the murders, Suradji pleaded innocent. A three judge panel found him guilty on April 27, 1998 after a four-month-long trial.
​
Suradji was sentenced to death. In spite of a last-minute appeal by Amnesty International, he was executed by firing squad on July 10, 2008.