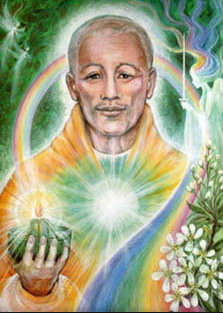 Who And What Are The Ascended Masters?

As the world rushes toward what many fear will be humanities final days on Earth, we hear a lot about ascension. The Christians believe their god-man Jesus will come down in the clouds and “rapture” them, or cause them to ascend into an afterlife with him. The Moslems share a similar belief that a “savior” will soon return to the world. And The Abba Father as well as spiritual masters like Her Holiness Sai Maa Lakshmi Devi teach how to turn on the inner light of our bodies, allow the soul to enter the body, and prepare for an ascension available to all mankind.

The idea is that the Earth is going to go through a change very soon . . . that the great I AM, the Creator, or the entities that appear to control events in our world and the Universe, have decided the only way to save the planet is to move it with the enlightened humans that are ready, into a new dimension.

From the messages we are received, it sounds as if humans are commissioned to “ascend” from our present position on this planet, to a new and higher spiritual plain, or existence. The directions we are getting are to use our minds and turn on the electrical or cellular lights throughout the physical body so that we turn ourselves into lighted beings. Yet the process of becoming what the spiritual teachers refer to as the “ascended masters,” apparently is not something to be accomplished in a single lifetime, and sometimes is never achieved.

So are we all in serious trouble? If the ascension is true, how can we prepare for it?
As stated on the Crystal Links website, “one difficulty in discussing the idea of an ascended master is that there is no universally accepted definitive, scientific text which describes what the conditions are to become such a person, or how to verify the condition.”

In the teachings of Theosophy, ascended masters are a group of spiritually enlightened beings, once mere mortals who have gone through spiritual transformation. They act as superintendents of the spiritual growth of humanity.

Yet another description of the ascended masters is that they are “enlightened Spiritual Beings who lived on Earth, faced the same challenges we face today and reunited with God. Today they serve as the teachers of mankind from the Realms of Spirit. They guide, protect, inspire and heal mankind.”

They are the teachers of the teachers within the realm of spiritual understanding. Such historical figures as the Dalai Lama, Sai Baba, Jesus, Mohammad, and the Buddha were and are clearly among the greatest of the ascended masters.

Do we dare to think that we can achieve this level of mental and spiritual awareness during this lifetime? According to The Abba Father, who communicated through my late wife Doris, we are not to fear. The light has always existed within us. We just need instructions on getting it activated so we can enjoy this power. He says it is a power we all knew but forgot after we arrived on Earth as little children and got caught up in the social condition that exists here.

The Abba Father said: “Humans contain so much light they are capable of becoming gods. But the light is dimming from not knowing who they are and being told they mean nothing.” This was reference to the Christian teaching that all humans are born in a sinful condition and remain sinners throughout their lives. He says this is wrong.

So what do we do to switch on this god-power within us? The Abba Father says our “resonance needs to be turned up, not off. Turn on this light. Go (mentally) within, open every cell, look at the light there.”

Doris, who spent her life in hospital laboratories looking at human cells through power microscopes, said this is true. All of the cells in our bodies “twinkle” and appear to have an energy of light within.

The Abba Father instructs: “Feel every cell communicating together. Raise the light like a flame, (with) sparks glowing. Keep this resonance in your head, using sparks glowing evermore. Do this quickly. Turn on Turn on. Lights glowing forever. Keep this momentum, feeling the glow.”

The good news is this power is not reserved for a select few, but is available for everyone. We are all capable of reaching “the ultimate fire. Use your cells. Use your brain. Use your open ideas about yourself. Glow!” He instructs. “Continue to turn on the light until you feel the warmth within. Now feel the sparks at your fingertips. They are felt there, tingling. You are now turned on to your light source, never to be turned off. Keep this flowing every day. Raise the light. Raise the frequency. You have begun!”

This is the message that all of the ascended masters have come to Earth and walked among humans to teach, and this is the message that many of them, like Jesus, came to deliver. The tragedy is that controlled and restricted religious systems have been in place on this planet for thousands of years, and they have brainwashed the masses. This is why few have discovered the power within. This is why, unless we wake up soon, very few will be brought into the new Earth when the dimensional shift occurs.
​
Is this story strangely like the Christian story of the “rapture?” We believe Jesus spoke of the future ascension of humanity into an even better world, and gave the same instructions for turning on the light which is reflected in love for our fellow man. His story was swallowed up by the Christian Church and turned into what it is today.