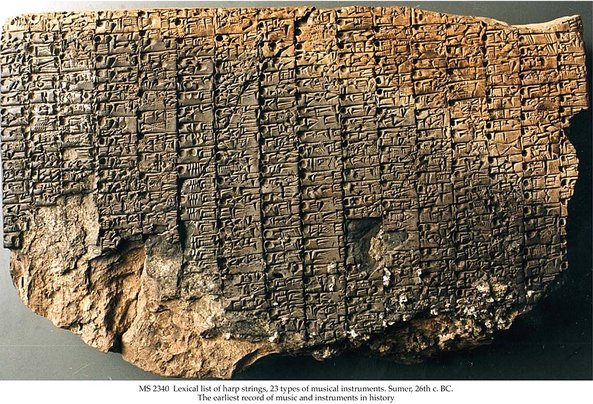 Long before the concept of paper and the use of quills and ink humans recorded important information of the day on clay tablets that were carefully stored for safe keeping. Thousands of these tablets have been turning up in archaeological excavations all over the world. Among the more interesting of the ancient “lost books” have been the tens of thousands of clay tablets, dating back an estimated 6,000 years, left by the civilization of the Indus Valley.

Careful work in translating the messages on these tablets has turned up many of the Genesis stories involving visitations by giants from other worlds, the rule of Enki (EA) the alleged serpent from the Garden of Eden story, and the destruction of humanity by a great flood.

Much of the Genesis story in the Old Testament is believed to have been copied from this ancient Sumerian text. What is of intense interest is the reference in these writings, which date back almost 6,000 years, are references to even earlier “lost books” or text inscribed in stone.

The earliest flood story is found on a single fragmented tabled that was excavated in Nippur. It is inscribed in Sumerian text and dated at about 1,600 BC.

Historians say the Sumerian civilization flourished in what is now Iraq. They were the first to record stories about gods and men. It is believed that the Hebrews acquired the stories of Creation, Adam and Eve, Cain and Abel, the Flood, the Tower of Babel and possibly all of the Book of Genesis from the Sumerian stories.

Controversial author and planetary historian Zecharia Sitchin, who has studied the Sumerian tablets, has produced the Tiamat Planet Theory from his interpretation of the writings. He supports a belief in Nibiru, an inhabited planet that is part of our solar system but makes such a wide arc that it only comes through the known planetary system every 3,600 years. He calls it the Twelfth Planet.

Sitchen believed that one of the moons of Nibiru was once in collision with Tiamat, a primitive planet in our solar system some 4.5 billion years ago. The collision cracked Tiamat into two parts. Then on a second pass, Nibiru struck one of the halves of Tiamat, smashing it into thousands of pieces. This he theorized became the asteroid belt that exists as part of  our solar system between 200 and 300 million miles from the sun. The second half of Tiamat was struck a second time by one of Nibiru’s moons and was pushed into a new orbit. Thus was created the planet we now know as the Earth.

The tablets also contain a story of the arrival of intelligent beings from Nibiru, a few hundred thousand years in the distant past, who came to find gold. It seems that gold was considered a precious commodity on Nibiru since it was used to restore the Nibiru atmosphere. The restoration was necessary because of damage that occurred in geological and climatic events during every pass made through this solar system.

Great quantities of gold were mined on Earth in those early times. But eventually the alien miners, referred to in Genesis as the Nephilim, conducted genetic experiments with an ape-like Earth creature and eventually created the Homo sapiens for the purpose of producing slave labor. The first humanoids then were created by the aliens to mine gold.

There exists among the tablets an interesting story about an early civilization known as the Nippur which seems to have existed for hundreds of thousands of years. Whether this civilization was humanoid or comprised of the Nephilim is unclear. What is reported is that there is a “King’s List” of ten successive ruler, each of them remaining alive and in power for extremely long periods of time. The first recorded king was Alulim, who may have been a woman. Alulim remained in power for 28,000 years. She saw the first great city known as Eridu come into existence. It stood throughout her reign and the following 36,000-year reign of the succeeding King Alalmar.

In Eridu was erected a magnificent temple and home of the king that was referred to in the tablets as E.EN.GUR.RA, or the “House of the Lord’s Triumphant Return Cuyo.” The temple was adorned with gold, silver and precious metals and protected by the “Bull of Heaven.” The understanding of these names is yet to be learned.

The so-called “King’s List” was apparently a very important document. Archaeologists to date have uncovered more than a dozen copies of it in Babylon, Susa, the Royal Library of Nineveh, Assyria and other places throughout the Middle East. More than 25,000 clay tablets were found in the ruins of the Library of Nineveh when the ruins of the city were uncovered in the mid-Nineteenth Century.

There is a belief among some scholars that Eridu was a reference to the Garden of Eden. The text at the beginning of the King’s List suggests that the list of rulers begins “after the waters covered the Earth.” In other words, the flood that covered the planet occurred a very long time in the ancient past and involved a civilization even older than the one identified in the Sumerian stories.
​
That text, some believed to be at least 6000 years old, made it clear that the Sumerians considered the earlier rulers as their superiors, or Gods that came from another planet.