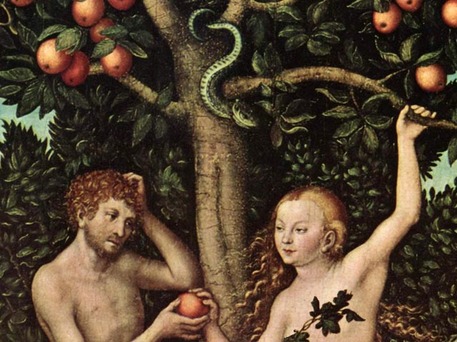 About The Adam And Eve Story

The story of God’s creation of Adam and Eve in the Book of Genesis is so full of biological, sociological, archaeological and historical holes it is difficult to find a point for a challenger to the story to start.

The archaeological and geological evidence of humanoids that walked the earth show that men and women were on the planet thousands of years before the Bible record begins. And from the appearance of the bones, those early primates were either in various evolutionary stages of development, or they were the result of DNA experimentation by outside sources.

A report that recently appeared in Discovery News states that an African-American man in South Carolina has been found to possess a rare mutated Y chromosome that can be traced back 338,000 years. This thus links this man to a humanoid species that existed on this planet long before the oldest known humanoid fossils.

Thus it appears that the biological information clearly debunks the Bible account of God’s instant creation of the first man, called Adam, and then giving him a "helpmate" named Eve. The very way the story is presented serves to make the male of the human species the superior human, and makes the females servants, or help-mates to the males.

That Eve then breaks God’s rule and eats from the Tree of Knowledge of Good and Evil, and then tempts Adam to follow her into sin, is the foundation for the Bible's second assault on the position of women in society. Instead of the creator of life and the mother of humanity, she is reduced to the position of a disobedient temptress and thus sentenced to remain a slave to the human race.

Many churches and other religious institutions to this day tend to place the males at the top of the line and force women into subservient roles.

That Eve’s curiosity caused her to bite into the fruit of knowledge shows her intelligence. She wanted to learn things that she was allegedly forbidden by the Creator to know. And once she had the knowledge, she wanted to share it with her male partner. From this perspective, where is the sin in seeking discovery? How could this condemn both Adam and Eve, and all of mankind to follow, to suffer in a sinful state of entrapment, constantly needing to make blood sacrifices to atone for everything they did in violation of a long list of ridiculous laws handed down by God through Moses, who allegedly met up with God while alone on a mountain.

We also have a myth about Adam’s first "wife," a woman known as Lilith. As the story is told in ancient books, carefully excluded from the final canon of books that comprise the Christian Bible, Adam preferred Eve when she appeared because she was fair and hairless. Lillith, on the other hand, was hairy. This suggests that she was from a more primitive species of humanoid; possibly a Neanderthal. But if Adam took her as a wife before Eve showed up on the scene, were there children from that first union? If so, then there were other offspring, all possessing the DNA of earlier ancestry.

That other human-type primates, capable of cross-breeding with Adam, were in existence answers the next burning question. And so we ask: who were the wives of the recorded sons Cain and Abel? How could Cain start a new generation of humans without breeding with his mother (heaven forbid) or finding a wandering Neanderthal in the forest and taking her to his bed?

Of course we don’t ask about Abel because Cain killed him. And that is a wild story in itself. But we don’t have a timeline to this story. Abel, if he even existed, lived long enough to take a woman as a wife and produce a family. The Bible is silent about this chain of offspring. It was as if it never existed.

Our conclusion after considering all of this is that the Bible story of the creation of the first family is nothing more than a myth. It couldn’t have happened that way.